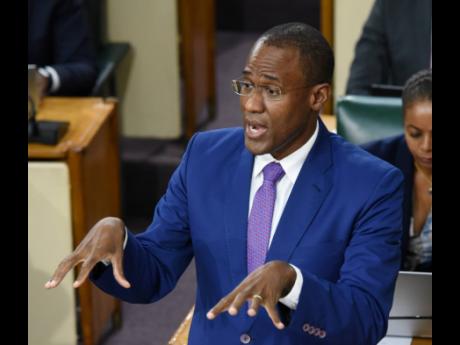 Finance Minister Dr Nigel Clarke is defending the Bank of Jamaica’s (BOJ) decision not to disclose how much of taxpayers’ money it spent to upgrade the country’s banknotes.

The country’s finance minister did not respond to specific concerns such as under what circumstances public entities such as the BOJ are allowed to enter into contracts that restrict the provision of basic information such as costs or whether his ministry has a policy that guides public entities on when such a situation is acceptable.

It is also not clear whether it is central bank practice in its contractual dealings or how widespread similar behaviour may be across the public sector.

Because the Integrity Commission no longer publishes details of contracts entered into by public bodies based on an interpretation of its act, the public also cannot check that source to determine whether the BOJ reported the amounts like other entities are required to.

The issue of transparency is also raised in the context of Clarke’s comment that the changes to the banknotes will mean that bids can be more competitive as currently, there are features on the $50 banknote and $100 banknote that only one printer in the world can produce.

However, while the Government is changing the notes to increase competition, the BOJ has entered into a contract that blocks public access to key details.

Last month, the BOJ said it could not provide the details that The Gleaner requested under the Access to Information Act because the contract with the supplier, De La Rue, is subject to a “strict confidentiality agreement”.

The bank also did not explain why it negotiated a contract that shields the information from the public.

“We are not able to disclose such information as the terms and conditions of the contract with De La Rue, which include the cost, are subject to a strict confidentiality agreement,” the BOJ said.

In his article Sunday, Clarke said he needed to respond to public concerns about the non-disclosure because as finance minister, he is ultimately responsible for the form and design of banknotes and coins to be issued by the BOJ.

The central bank had indicated that the selection of the British company was the result of a “rigorous procurement process”, with the final recommendation coming from the finance minister as stipulated by the BOJ Act.

Clarke reiterated his comments from his Budget presentation in March that the changes to the notes are, among other things, to reduce costs and to enhance security features to make it difficult to counterfeit.

He said if the BOJ does not upgrade the notes, it is projected to cost the bank $16.6 billion over the next 10 years to buy notes.

With the changes, including the introduction of a $2,000 note, the BOJ expects to save $4 billion over the decade.

“The modernisation of Jamaica’s family of banknotes is indeed overdue and Jamaica is behind our peers in this regard,” the finance minister concluded.

The cost of printing banknotes over the last three years (2019-2021) was approximately US$7 million (J$1.1 billion) per annum, the bank said.