‘Violence one of the root causes of NCDs’ 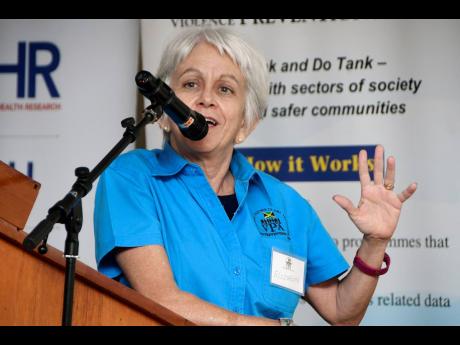 Professor Elizabeth Ward, chair of the Violence Prevention Alliance (VPA), said that one of the root causes of non-communicable diseases (NCDs) in Jamaica is violence.

“All across the spectrum of our non-communicable diseases we are seeing these increases and violence is part of the root cause,” she pointed out.

Ward made the link while making a presentation at the monthly steering committee meeting of the VPA recently, where she was the guest speaker.

The VPA chair also informed that according to data from the Center for Disease Control and Prevention (CDC), children affected from childhood trauma are 12 times more likely to commit suicide, 4.4 times likely to suffer from depression and 7.5 times more likely to perpetrate violence or become the victims of violence.

Citing some of these adverse childhood experiences which lead to development of NCDs, she said this include: abuse; neglect and household challenges such as intimate partner violence, mental illness, incarceration, parental separation or divorce and substance dependency.

She, however, noted that prevention was key. She informed that programmes and policies can be developed to target the social and economic determinants of violence. She, however, added that when prevention fails, it can be treated.

“After the occurrence, it is hard work to treat it effectively. Then there is rehabilitation. You have to focus on preventing the recurrence. We have to prevent long-term impairment and we have to look at the long-term outcomes,” she stated.

Professor Ward, however, underscored that children need reassurance of safety, routines, regulations and relationships, which she said are the core components of resilience. She also recommends safe, clean, green spaces with supervised activities.

“If our programmes were more synchronised we would see the benefits more and modify slightly. We could have multiply benefits for prevention,” she said.

“Remember, violence is very concentrated so if we target the right people in the right way for the right duration, we can have the greatest effects. We need to have the data and be able to evaluate it. One of the biggest things is that we often do not collect the data effectively and we do not have the case control cohort studies to be able to evaluate whether or not we are making an impact,” she said.

She noted that community engagement was also critical in yielding success as without the involvement of the community, the interventions might not work.

According to data from the latest Jamaica Health and Lifestyle Survey, 29 per cent of Jamaicans 15 years old and older are obese; 12 per cent are diabetic and 34 per cent are hypertensive.