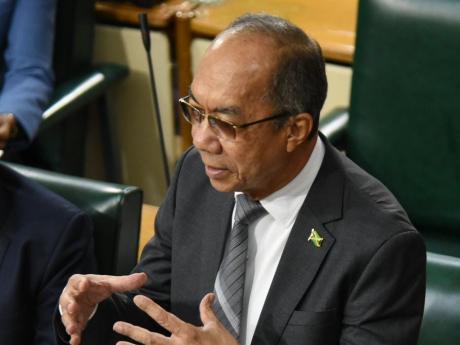 Chang: "Nobody is being currently detained under any clause in the regulations." -File photo.

Several gangsters who have been detained since the declaration of the State of Public Emergency in St Catherine last week Friday have been arrested and charged under the Jamaica Constabulary Force Act.

Minister of National Security Dr Horace Chang told his parliamentary colleagues this afternoon that the police have not used any of the powers in the regulations that were intended to accompany the security measure in the parish.

“A number of critical players have been apprehended and they are being held under the Jamaica Constabulary Force Act. Most of them have been charged because there are charges that could be laid and I think a couple are awaiting an identification parade. Nobody is being currently detained under any clause in the regulations,” Chang said.

The national security minister tabled the new SOE regulations this afternoon, revoking a previous document that was erroneously tabled on Tuesday.

Leader of Opposition Business in the Lower House Phillip Paulwell sought further clarification on the SOE in St Catherine.

“You are saying that since the state of emergency was introduced on Friday in the parish of St Catherine, nobody has been held under the regulations that came into effect on Friday morning?”

“Nobody has been so held,” Chang confirmed.

Member of Parliament for St Andrew South West Dr Angela Brown Burke said that many persons have argued in the past that there were other provisions in law under which the police could carry out their duties and apprehend wrongdoers.

Brown Burke noted that Chang's admission has reinforced the notion that there are other ways of apprehending persons without using the SOE.

Meanwhile, Chang told his fellow lawmakers that the regulations tabled today were signed by the Governor General and sent to the printer.

However, he said, “... what came back on Tuesday is not what I have in my hand. How that happened is a matter of concern, as I indicated we will investigate to understand how and why because it is of concern to me personally as the minister responsible at this point in time, why it is that such a grave error has been made.”