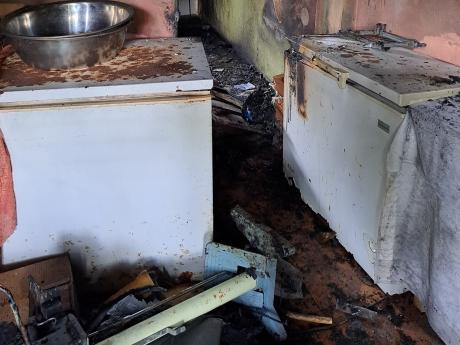 A man identified only as Jason, believed to be in his early 30s, was hacked to death and his body discovered by his landlord at about 7 o'clock this morning in a gully behind the rented house he occupied.

The house was set ablaze, also destroying an adjoining room used as storage by the owner of the building.

A white Nissan AD wagon, that police confirmed was stolen, which was parked on the premises was partially destroyed in the blaze.

Two freezers and an industrial sewing machine belonging to the owner were also destroyed.

According to the landlord, who lived within close proximity to the rented building, her son woke her about 11:00 pm yesterday and told her that the building was on fire.

She said she did not know that Jason had died until this morning when she went to inspect the fire damage and saw his lifeless body in the gully with his head almost severed and multiple wounds all over his body.

She said she did not know anything about him, only that he said his name was Jason when she rented him the premises about a year ago.