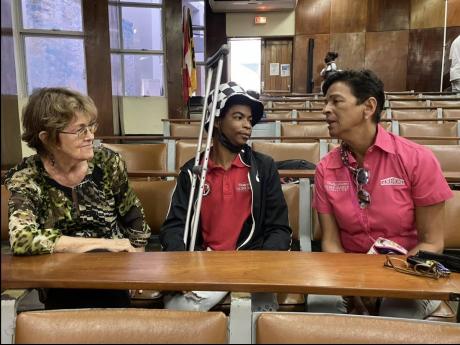 Contributed
Twyrike Campbell (centre), sickle-cell patient and participant in the Rose Town Construction Internship Programme, listens to Christine Gore (right), director, Gore Developments Limited after the presentation of findings from the programme in the last 10 months at the Mico University College. Also sharing in the moment is Jennifer Jones, psychologist, who taught Campbell during the programme. 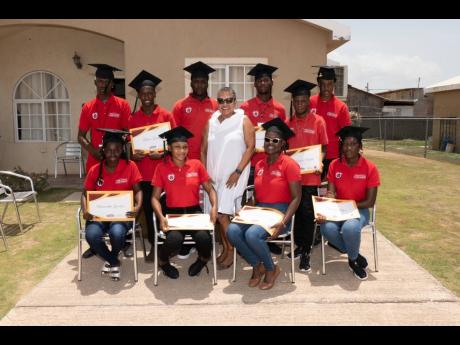 Contributed
Ruth Jankee, executive director of the Rose Town Foundation, stands with the interns at their graduation. 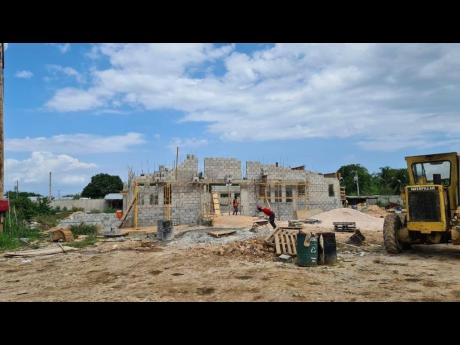 Contributed
A community centre that the interns are building. 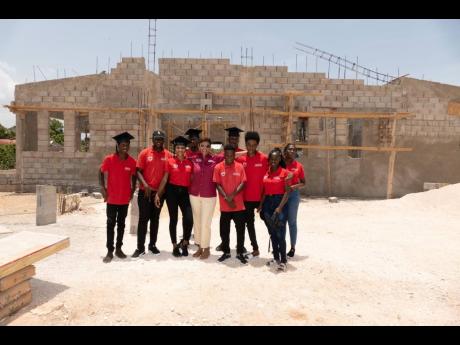 Contributed
Christine Gore, executive director of the Gore Family Foundation, proudly stands with the interns at the community centre that they are building at Gore Developments Limited’s Phoenix Park site.
1
2
3
4

Without intervention from The Phillip & Christine Gore Family Foundation in the last 10 months, sickle-cell patient, Twyrike Campbell, who is now recovering after having an ulcer in his left leg, feels he would have gone down a path of destruction.

According to the 21-year-old inner-city youth, who resides in the violence-plagued and divided community of Rose Town in Kingston, since the onset of the pandemic, he has been unable to secure a job, and each day he would leisurely chill in his community.

Now, he has found purpose through the Rose Town Construction Internship Programme, which shuttles him and other youths each week day from Rose Town to Gore’s construction site at Phoenix Park Village in St Catherine.

“Before the programme, I was mostly doing nothing, nothing ... just get up a live,” the youth, who graduated from Norman Manley High School in 2017 with four Caribbean Secondary Education Certificate subjects,” told The Gleaner. He had also attended HEART/NSTA Trust and pursued certification in level-two commercial food preparation.

Campbell explained that it was not that he did not want to be employed or at least be engaged in a programme, but he was just not able to secure a job.

Now, in addition to training him, the Rose Town Construction Internship Programme pays him a stipend of $1,000 per day and he has learnt several skills in the area of building construction, such as masonry, plumbing and carpentry in the past 10 months.

“I have benefitted from the programme in many ways. I’m learning a trade, and actually life skills as well, even simple things like manners,” Campbell said.

He continued, “I love it overall. The fact that the teachers and everyone there let us feel welcome, teaching us and bringing us out and letting us see places and learning as we go along.”

He was speaking with The Gleaner during the presentation of findings from the programme at the Mico University College on June 15.

Christine Gore, director, Gore Developments Limited, said it is youth such as Campbell whom she was very concerned about, why she pitched the idea a year ago to start the programme.

She saw a CAPRI Monitoring and Evaluation Frameworks for At-Risk Youth Programmes in Jamaica, which was released in 2020, which she read and innately felt she had to start her own programme with at least 15 youths.

Her company then approached the Rose Town Foundation for Youth from both sides of the innercity community of Rose Town in Kingston.

This resulted in the multimillion-dollar housing manufacturing company, Gore Developments Limited, doing an experiment where 80 per cent of youths (12 out of the 15) they engaged, have either landed jobs or have been enrolled in training programmes.

The university students will start their programmes in September.

Gore told The Gleaner that another thing which concerned her was that during pre-pandemic times, there were more at-risk youths than those youths employed in the hospitality industry.

She also said it was a joy engaging with these youths.

“When they get in the bus in the morning, they have an audible book they are listening to about team building. For the first week, they listened about being calm, handling pressure, about focus, managing your emotions, anger control and all the emotional issues that we are dealing with at school. They listen to that going, and coming back home,” Christine told The Gleaner.

“Sometimes they get off the bus and north [members] talking to south [members] and then sometimes north walks off with south and that’s the way you build a community and a team. That’s what they are now,” she added.

She also said the students were taken on a trip into the mountains and to Hollywell to look down on Rose Town with the objective of putting their community into perspective, which was a very insightful experience.