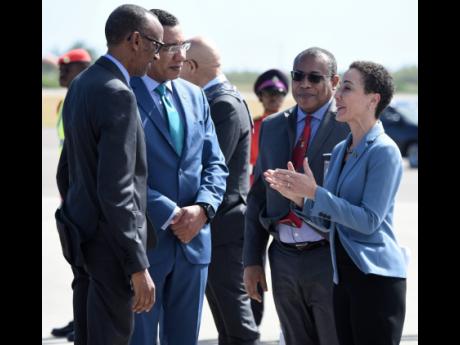 Ian Allen
Paul Kagame (left), president of the Republic of Rwanda, exchanges words with Kamina Johnson Smith (right), minister of foreign affairs and foreign trade, as he departs the Norman Manley International Airport in Kingston following his state visit to Jamaica in April.

Minister of Foreign Affairs Senator Kamina Johnson Smith, who is seeking to become Commonwealth secretary general, has cautioned against singling out member states struggling with less than perfect human rights records on the premise that “it’s not helpful” at this stage.

Johnson Smith, who is in Kigali, Rwanda, for the Commonwealth Heads of Government Meeting, said it should be recognised that all countries are at different phases in adhering to human rights charters, but they do abide by and believe in the Charter of Fundamental Rights and Freedoms and the supporting conventions.

Johnson Smith faced questions at a media briefing on Wednesday about host country Rwanda’s human rights record under President Paul Kagame, as well as Gabon’s, which is expected to join the Commonwealth of Nations this week.

Allegations of opposition suppression and freedom of speech have been rife under the Kagame regime, with mounting concerns about the administration’s reported destabilisation efforts in neighbouring countries.

The Rwandan government’s deal with the British Government to accept deported asylum seekers into the country has also not escaped scrutiny and has been temporarily halted by the European Court of Human Rights.

Asked if, as secretary general, she would want stricter adherence to the principles of human rights from member states, Johnson Smith said that this is very important for the former British colonies.

“That is what heads committed to when they signed ... I think to try to single out countries at this stage is not helpful. The point is to recognise them as a process. The Commonwealth has taken action where it has felt action was appropriate,” Johnson Smith insisted.

“I think that recognising that countries are all on a path and there’s a process, the starting point must be adherence to principles and then how it is these principles are applied. I think if we are respectful of nations and recognise their process and support them in the process you achieve more than simply trying to take a fixed position on a particular point such as engaging in ratings, which I really wouldn’t do at this point in time,” she asserted while declining to rate Rwanda on its human rights record.