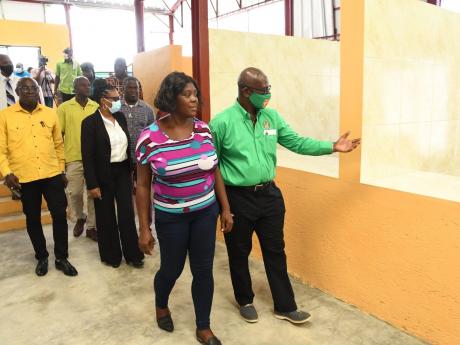 Minister of Local Government and Rural Development, Desmond McKenzie (right), is joined by vendor, Charmaine McIntosh, on a tour of the newly rebuilt Hopewell Market in Hanover that was officially opened on Thursday, June 23. - Contributed photo.

More than 24 vendors will be occupying the newly rebuilt Hopewell Market in Hanover, which was officially opened on Thursday by Minister of Local Government and Rural Development, Desmond McKenzie.

The modern facility, constructed at a cost of approximately $23 million, replaces the old market that had fallen into disrepair.

The rebuilt structure boasts new stalls, fish and meat areas, storage, bathrooms and other amenities to enhance the experience of vendors and buyers.

It will serve a population of some 6,000 people who live in and around the township.

A mural was painted on the walls of the market as part of the Ministry's national beautification initiative, 'Paint the City, Paint the Town'.

In his address, McKenzie said the Government recognises the importance of markets as the centre of commerce in rural towns and, as such, has been rehabilitating facilities across the island.

“Since 2016, the Government, led by Prime Minister Andrew Holness, has spent quite a lot on markets across the country,” said McKenzie.

The local government minister said work on the Hopewell Market was completed within budget and took into consideration the recommendations of vendors, who were engaged prior to and during the construction.

He urged the vendors, that in addition to protecting the infrastructure, they should also ensure that they pay their market fees.

“Understand that the market fees are what you use to maintain the place. More people will be employed now. So, you have bathrooms, you need attendants, you have a new facility, you need to have security. The place needs to be kept clean, so it means new persons have to be employed,” McKenzie pointed out.

He noted that the Government, since 2016, has spent more than $700 million to carry out various improvements in Hanover.

“We made a commitment to deliver and that is what we are delivering,” he said.

Vendor, Junior Gordon, who will be occupying the new market, told JIS News that he feels good about the new and improved facility.

He said that during the construction phase, they were relocated to a car park, but noted that the vendors are now starting to occupy the new market.

He gave a commitment, on behalf of the other vendors, to protect the space and keep it clean.

“I think we'll have more customers because they will be shopping in greater comfort. We appreciate [the new market] and I hope that they will come and shop with us,” said Gordon.