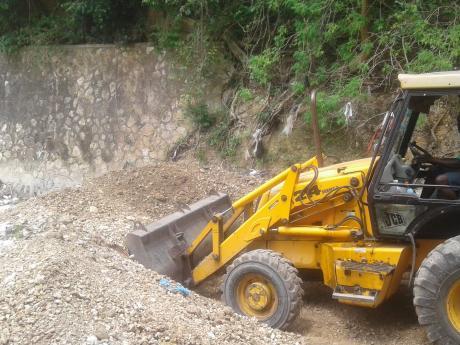 The project will mitigate the erosion of embankments to properties located along the gully. - File photo.

The NWA says the $24 million project forms part of the agency's effort to increase the parish's state of readiness for the 2022 Atlantic Hurricane Season.

The North Gully, which runs through the Canterbury community, carries storm water through several communities close to the city centre of Montego Bay.

The NWA notes that over time, sections of the walls and inverts of the gully have been eroded.

The project seeks to address these issues as well as mitigate erosion of embankments to properties located along the gully.

Community Relations Officer for the NWA's Western Region, Janel Ricketts, says that the project will see the reconstruction of gully walls and inverts.

Ricketts says the project will augment similar drainage improvement initiatives which have been undertaken since 2022.

It was noted that a multimillion-dollar drain cleaning project is also now under way throughout St James.

Among the targeted drains are the Blue Diamond Gully, the North Gully as well as drains along the Anchovy to Shettlewood main road.

The NWA says the projects are now far advanced and will be completed in short order.