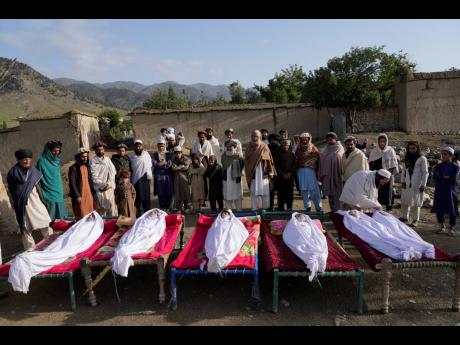 AP
Afghans stand by the bodies of relatives killed in an earthquake in Gayan village, in Paktika province, Afghanistan, Thursday, June 23.

An aftershock took more lives on Friday and threatened to pile even more misery on an area of eastern Afghanistan reeling from a powerful earthquake that state media said killed 1,150 people this week.

Among the dead from Wednesday’s magnitude 6.0 quake are 121 children, but that figure is expected to climb, said Mohamed Ayoya, UNICEF’s representative in Afghanistan. He said close to 70 children were injured.

That earthquake struck a remote, mountainous region already grappling with staggering poverty at a time when the country as a whole is spiralling deeper into economic crisis after many countries pulled back critical financing and development, aid in the wake of the Taliban’s takeover. On Friday, Pakistan’s Meteorological Department reported a new, 4.2-magnitude quake that state-run Bakhtar News Agency reported took five more lives in hard-hit Gayan District and injured 11 people.

International aid had been keeping the country afloat, and its withdrawal left millions unable to afford food and further strained already-struggling medical facilities. Nearly half the population of 38 million cannot meet their basic food needs, while some civil servants, like doctors, nurses and teachers, weren’t paid for months because the Taliban government is unable to access frozen foreign reserves. Salary delays continue throughout the public sector.

Afghanistan’s international isolation is also complicating relief efforts since fewer aid organisations have a presence in the country, and international sanctions on Afghan banks make it difficult to send cash into the country. Despite waivers from the US Treasury Department that allow money to be sent to aid groups, banks are hesitant to handle such transactions for fear of running afoul of rules anyway.

Aid groups lament that means they have to pay local staff with bags of cash, physically carried into the country by their staff and then distributed throughout the provinces in person. The process is expensive, incurring fees along the way for transport and security.

Aid organisations like the local Red Crescent, and UN agencies like the World Food Program have sent food, tents, sleeping mats and other essentials to families in Paktika province, the epicentre of the earthquake, and neighbouring Khost province. Several countries have sent cargo planes of aid.

Still, residents appeared to be largely on their own to deal with the aftermath as their new Taliban-led government and the international aid community struggle to bring in help. The shoddy mountain roads leading to the affected areas were made worse by damage and rain.

Thousands of stone and mud-brick homes crumbled in the quake, which struck at night, often trapping whole families in the rubble. Many of those who survived spent the first night outside in a cold rain. Since then, villagers have been burying their dead and digging through the rubble by hand, in search of survivors.

The Taliban director of the Bakhtar News Agency said Friday the death toll from the first quake had risen to 1,150 people. Abdul Wahid Rayan said at least 1,600 people were injured.