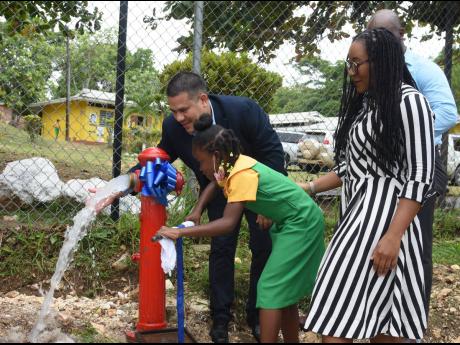 After approximately 40 years of inconsistent water supply in their community, residents of Brampton, Trelawny are rejoicing following Thursday’s official commissioning of the National Water Commission’s [NWC] Baron Hill to Samuel Prospect Pipeline Replacement Project, which will benefit over 11,500 residents in some six communities.

The commissioning ceremony was carried out by Matthew Samuda, minister without portfolio in the Ministry of Economic Growth and Job Creation, at the Brampton Primary School, after more than a year of construction to replace the former pipeline at a cost of $275 million. Along with Brampton, the water system will benefit the communities of Baron Hill, Samuel Prospect, Rio Bueno, Jackson Town, and Barnstaple.

Elece Beasley, who has lived in Brampton for 38 years, told The Gleaner that, prior to the new pipeline’s installation, she had to spend upwards of $10,000 each month to get water trucked to her home.

“The water conditions have been poor, and sometimes we do not have water for days. For myself, because I do not live on the main road, I would have to buy water each month, and it cost me $10,000 because I have the overhead tanks, and, based on the amount of gallons that the trucks hold, that is how much the persons would charge,” Beasley explained.

“I am very excited about this commissioning and, since this project began, I have not purchased any water. It has been good so far, and the feedback from the community has been good as well, as persons are very grateful for the project,” Beasley added.

Fellow Brampton resident O’Neil Codling, who has lived in the area for 20 years, recalled that, before the new pipeline was built, he had to rely on rain to supply his water needs.

“The water situation was very low for a long time. I had to depend on rainwater and buy water when rain did not fall, and sometimes it would cost me $5,000,” said Codling. “Now that water has come, we have to give thanks for it. This is a good thing, and we just have to apply for it and benefit from it.”

The new pipeline’s construction began in April 2021 after numerous leaks were found along the existing main leading to the Baron Hill storage tank, which was fed from the Dornoch water treatment plant. The leaks, along with the ageing cast-iron and asbestos pipes and illegal connections, resulted in major water losses for the NWC.

In his keynote address during Thursday’s commissioning ceremony, Samuda noted that some $2.1 billion is to be invested to improve Trelawny’s water supply system.

“The entire upgrade is being conducted in phases. $2.1 billion is being invested into the community of Trelawny, and we are going to make sure they are connected not just by good roads, but by a well-maintained distribution network for water,” said Samuda. “There is no pride in trucking water, but there is pride in piped water.”

Meanwhile, NWC Vice-President of Operations Kevin Kerr stressed that the utility’s customers are the first ones who must benefit from the commodity’s supply.

“It was the poet W.H. Audin who said, ‘Thousands have lived without love, but not one without water.’ The importance of water to life and livelihood is never lost on the management and staff of the NWC, and, because we know that residents in several rural communities cannot do without water, we are determined to improve the infrastructure so that the precious commodity is available on a regular and consistent basis,” said Kerr.