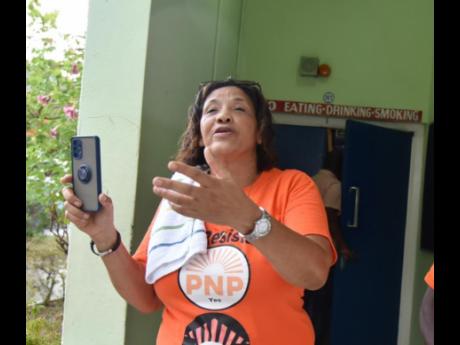 Cross was expelled from the PNP in September 2021. -Kenyon Hemans photo

There was drama at the People's National Party's (PNP) Papine divisional conference now underway in St Andrew after expelled member Karen Cross protested outside the venue.

The event is being held at The University of the West Indies, Mona.

She was upset at being barred from attending the public session of the conference and started a live stream on Facebook.

Her lone supporter called for a challenge to the party's leadership.

But he ignored Cross' appeals on his way to the conference hall.

Cross was eventually allowed inside just before the arrival of PNP President Mark Golding, where she continued her live broadcast.

It's her latest protest against the current leadership of the party.

Cross was expelled from the PNP in September 2021.

It followed a series of allegations made against Dr Campbell. He has denied them and is suing her for dafamation.