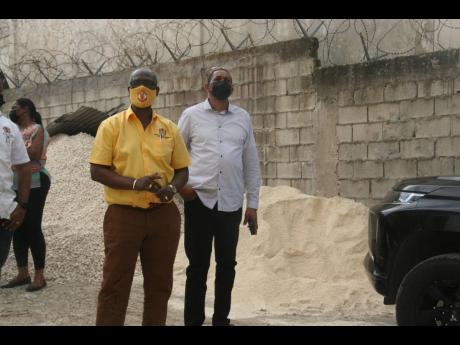 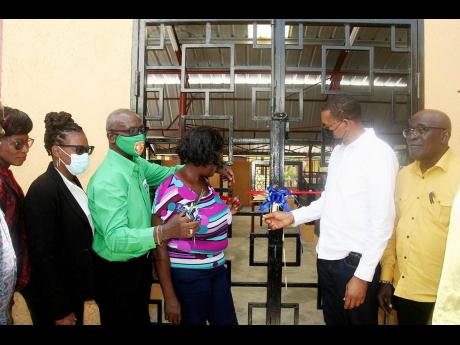 Bryan Miller
From left: Deputy Mayor of Lucea Andria Dehaney-Grant; Member of Parliament for Western Hanover Tamika Davis; Minister of Local Government and Rural Development Desmond McKenzie; vendor in the Hopewell Market, Charmaine McIntosh; Member of Parliament for Eastern Hanover Dave Brown; and Mayor of Lucea Sheridan Samuels all line-up to cut the ribbon to mark the official reopening of the Hopewell Market in Hanover on Thursday.
1
2

The fruits, vegetables and meat market, located in the town of Hopewell in eastern Hanover, was officially reopened on Thursday, June 23, after being closed for several months for reconstruction and expansion works to be carried out.

Minister of Local Government and Rural Development Desmond McKenzie was on hand to cut the ribbon to mark the official reopening of the facility, which will see the vendors who were relocated to the unoccupied transport centre in the town taking up their rightful places in the improved market.

Work on the facility started in mid-2021 and was slated to be done in two phases, with Phase One to end in October, and Phase Two to start in November and end by December 2021. The first phase was slated to cost approximately $8 million, while the second phase was set to cost an additional $12 million.

When the deadline for the second phase was missed, it took the intervention of McKenzie in December last year to get things going, the result of which is the completion and handover six months after the projected date.

Speaking at the official ribbon-cutting and handover ceremony, McKenzie stated that the project was completed at a cost of approximately $23 million, which he considers still to be within budget, but expressed dissatisfaction with the length of time it took to be completed.

He argued that the present government recognises the importance of markets to the economy, noting that “since 2016, the Government has spent quite a lot on markets across the country”.

“One of the good things about it, some $23 million or thereabouts was spent on the market (in Hopewell), and I am pleased, I must say, that the work was done within the budget that the Ministry of Local Government provided. However, I am not pleased with the length of time that it took for the work to be done,” he said.

McKenzie called on the vendors and customers who will be using the facility to ensure that they protect and take care of it, while also encouraging the vendors to make sure that they pay their market fees to the municipal corporation.

He added that his ministry will be rolling out a series of improvement projects for markets across the country during this year, while naming the market in Savanna-la-Mar, Charles Gordon Market in Montego Bay, and the market in Santa Cruz, as those next in line for improvements.

Mayor of Lucea and chairman of the Hanover Municipal Corporation (HMC) Sheridan Samuels, in addressing the ceremony, underscored the importance of market activity to the economy nationally, arguing that the new and improved facility in Hopewell will upgrade the aesthetics of the town and enhance the shopping experience within the space.

He commended the vendors for their patience during the construction phases, even against the background of the possibility of their losing money daily.

“These vendors, on a daily basis, despite their many losses due to lack of convenience and security, continue to provide a service that is essential to the people of Hopewell and its surroundings,” he stated, adding that “we know your pain, we have heard your cry, and we are at your rescue”.