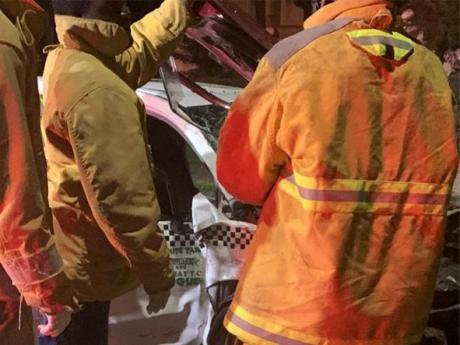 The bodies of the deceased men had to be cut from the wreckage. - Contributed photo

Two men were killed in a car crash along the Rose Hall main road in Montego Bay, St James early this morning.

Acting parish commander, Superintendent Carlos Russell says speeding was a key factor behind the incident that took place about 1 a.m., in the vicinity of the Jewel Grande Montego Bay Resort & Spa.

The two-vehicle collision involved a red Toyota Corolla that was travelling from the direction of Falmouth in Trelawny, and a white Nissan AD Wagon that was heading in the opposite direction.

The driver of the Corolla reportedly lost control of the vehicle which went over a median and into the path of the AD Wagon.

The Corolla broke apart on impact and the occupants, two males, died on the spot, Russell said.

He said their bodies had to be cut from the wreckage.

A passenger in the other vehicle received multiple injuries and has been admitted to hospital.

The identities of the deceased persons have not been released.