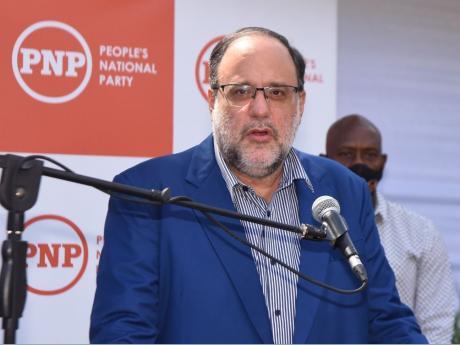 Golding: "The JLP bwoy dem nuh stop shot themselves in a dem own a foot."

"When a Jamaican put themselves up, we have fi support still, so mi never really come out hard but inna miself mi sey it is a little weird thing," Golding said, while addressing party supporters at the Papine divisional conference at The University of the West Indies, Mona on Saturday.

He argued that Scotland is a Caribbean representative who did not complete the conventional two terms and who was supported in 2015 by Jamaica. Golding's PNP held state power at the time.

"If you a mek a move like that you haffi have the thing lock, it nuh mek no sense you push out and you might lose, what kind a foolishness that, mi nuh know who put dem up to it star, but to tell you the truth it is an embarrassment," Golding said.

He added that the government spent a lot of money to push Johnson's candidacy and the Opposition wants to know how that money was spent.

Johnson Smith did her best but said the Holness administration has been left with 'eggs on their faces', Golding argued.

Prime Minister Andrew Holness has insisted that Jamaica's candidacy was to unite the 54-member Commonwealth.

The administration has also dismissed suggestions that Jamaica was doing the bidding of the United Kingdom whose leader Boris Johnson wanted Scotland out.

International marketing firm, Finn Partners was tapped to provide public relations services under a three-month US$99,000 contract with Johnson Smith that expires June 30.

Johnson Smith narrowly lost the election 27 to 24 in a secret vote at a meeting of Commonwealth leaders in Rwanda on Friday.

The PNP leader also attacked the government over the tabling of the wrong regulations for the St Catherine state of emergency (SOE) in the House of Representatives last week Tuesday.

It forced the government to convene a meeting of the House on Thursday so Deputy Prime Minister and National Security Minister Dr Horace Chang could introduce the correct ones.

"The JLP bwoy dem nuh stop shot themselves in a dem own a foot," he said.

"First of all dem table the wrong regulations for the state of emergency, what kind a foolishness is that? It is just the heights of slackness."

He continued: "And dem have a ministry devoted to legislation and doing nothing else; Dem tek it out of justice and established a ministry and dem can't even manage to table the right legislation."

He was referring to the newly created Ministry of Legal and Constitutional Affairs headed by Marlene Malahoo Forte.

Golding says the Opposition will not support the proposed regulations claiming they are not constitutional.