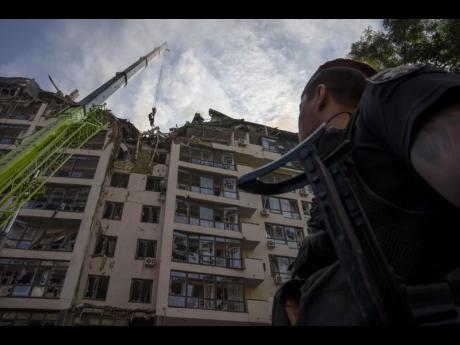 Servicemen work at the scene at a residential building following explosions, in Kyiv, Ukraine, Sunday, June 26, 2022. Several explosions rocked the west of the Ukrainian capital in the early hours of Sunday morning, with at least two residential buildings struck, according to Kyiv mayor Vitali Klitschko. (AP Photo/Nariman El-Mofty)

A nearby kindergarten was also damaged, with a crater in its courtyard.

A member of the Ukrainian parliament, Oleksiy Goncharenko, wrote on the Telegram messaging app that “according to prelim data 14 missiles were launched against Kyiv region and Kyiv.” Air Force spokesman Yuriy Ignat said the missiles were Kh-101 air-launched cruise missiles fired from planes over the Caspian Sea.

In the city of Cherkasy, about 160 kilometers (100 miles) southeast of Kyiv, one person was killed and five injured in strikes by two Russian rockets, regional governor Ihor Taburets said.

The early morning Russian airstrikes were the first to successfully target the capital since June 5.

Klitschko told journalists that he believed “it is maybe a symbolic attack” ahead of an upcoming NATO summit in Madrid.

Two more explosions were later heard in Kyiv, but their cause and possible casualties were not immediately clear.

U.S. President Joe Biden, while standing with Olaf Scholz as the German chancellor greeted leaders arriving to open a Group of Seven summit Sunday, was asked for his reaction to the latest Russian missile strikes on Kyiv, said. “It's more of their barbarism,” he replied.

Biden said the United States and other G-7 leading economies intend to announce a ban on imports of gold from Russia. They hope that measure will further isolate Russia economically over its invasion of Ukraine.

Senior Biden administration officials said gold is Moscow's second-largest export after energy and that banning imports would make it more difficult for Russia to participate in global markets.

Biden's Twitter feed said Russia “rakes in tens of billions of dollars” from the sale of its gold.

Meanwhile, Russian forces have battled to swallow up the last remaining Ukrainian stronghold in the eastern Luhansk region, pressing their momentum after taking full control Saturday of the city of Sievierodonetsk, including a chemical plant where hundreds of Ukrainian troops and civilians had holed up.

“There's very much destruction — Lysychansk is almost unrecognizable,” he wrote on Facebook.

Russian Defense Ministry spokesman Igor Konashenkov said late Saturday that Russian and Moscow-backed separatist forces now control Sievierodonetsk and the villages surrounding it. He said the attempt by Ukrainian forces to turn the Azot plant into a “stubborn center of resistance” had been thwarted.

The bombardment preceded a meeting between Russian President Vladimir Putin and Belarusian President Alexander Lukashenko, during which Putin announced that Russia planned to supply Belarus with the Iskander-M missile system.