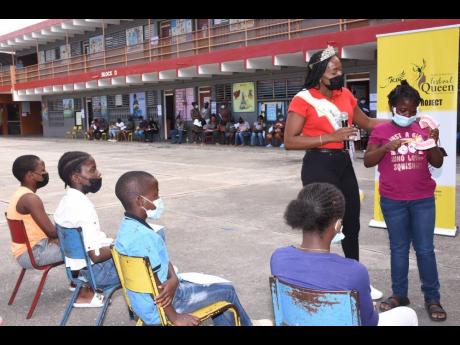 Having reached more than 600 primary-school children in five parishes through her ‘Project Healthy Smiles Jamaica’ outreach project, Miss Jamaica Festival Queen 2021 and dentist Dr Dominique Reid is relishing the success of the initiative.

The outreach project had a target of 590 students, in keeping with Jamaica’s 59th anniversary of Independence, which was the Festival Queen’s reigning year, but exceeded the number to reach 610.

“I am happy that my project came off … and to see kids getting excited about dental health. When we practise good dental health as children, we take it with us through adulthood,” Reid shared with JIS News.

She noted that the idea for the project initially came while she was working in the public service and saw the need to provide dental care and knowledge to children and their parents.

After winning the Miss Jamaica Festival Queen Competition, she decided to take on the issue as her major project. “With the low level of dental knowledge, there was also a high level of dental anxiety, and I thought this would be my way to give back, so that people know how to take care of their teeth, teaching them about [oral] hygiene and its importance,” Reid said.

She told JIS News that the experience was “eye-opening”, noting that for many of the children, it was the first time that they were seeing a dentist.

“It was nice to be that change; to instil a positive dental experience for them, because a lot of them were very afraid of the dentist. I was happy to change that mindset and give them a positive experience and access to dental care that they could not afford, or they didn’t think was important,” she noted.

The Festival Queen called for parents to place greater focus on their children’s dental health, paying keen attention to what they consume, such as sweet snacks and beverages, as the negative effects on the teeth can be very costly to treat.

The tooth tours began at the May Pen Primary School in Clarendon, where Reid and her team treated 87 students.

Phase one of the project was completed in December 2021 and saw the Festival Queen giving interactive ‘tooth talks’ on the importance of oral healthcare and hygiene to hundreds of students across the island via Zoom.

Several school principals expressed pleasure at the dental care provided for their students.

Principal of Goshen Primary Natalie Roper-Allen said the project “uplifted the students, as a number of them could not afford to pay for the services, and we are happy that she (Dr Reid) thought about our school. I would recommend that this type of initiative be done with all primary schools”.

Principal of Villa Road Primary Brent James said the initiative was timely, as the school was about to embark on a similar project.

“It helped us to achieve that objective, and the parents were very appreciative. They got quality service,” he said.

At Half-Way Tree Primary, where more than 100 children benefited from the intervention, vice-principal Shelly Elaine Lee also expressed gratitude. “It was a big deal for us, and Dr Reid was particularly excited for the students,” she said.

Reid said she was honoured to serve as 2021 Festival Queen and follow in the footsteps of her mother, Karlene Kelly Reid, who was Manchester Parish Queen and National Queen in 1991.

“It adds a lot to who you are as a person. You get a lot of personal development and growth, and the opportunity to contribute as a nation-builder for Jamaica. You are able to use your role to help others and to become a cultural ambassador,” she explained.

As her reign approaches the final month, Reid intends to continue to provide free dental care to children in her native Manchester.