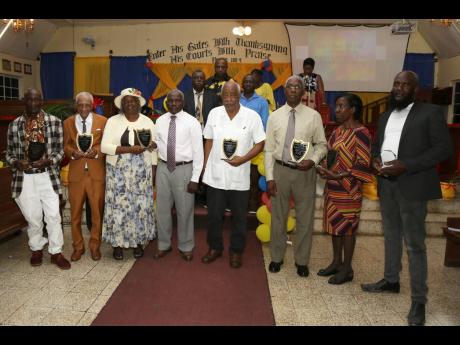 Nathaniel Stewart
Members of Kellits and Crofts Hill community who were awarded for outstanding service at the One Connection Group’s 10th Anniversary Awards Ceremony in Crofts Hill on Saturday, June 25. 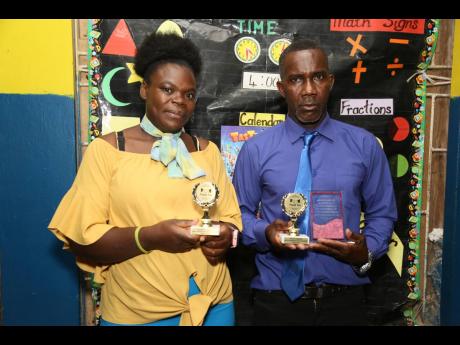 Nathaniel Stewart
Annmarie Nelson and Steve Gordon were awarded most outstanding female and male volunteers at the One Connection Group’s10th Anniversary Awards Ceremony.
1
2

Over 30 community stalwarts were awarded by the One Connection Group in Crofts Hill, Clarendon, on Saturday at the Crofts Hill Baptist Church.

Some of the awardees are volunteers in the group, while the rest are those who have been serving the community with their talents and resources for years.

Founder of the group Romeo Rowe, commenting on the initiative, said a lot of persons have been faithfully giving back to their communities but will never make the honours list, whether locally or on a national level, which is why they have seen it fit to recognise them.

Keynote speaker Dr Carolyn Graham lauded the group, referring to them as “not just an ordinary group, but an extraordinary one”.

“We are living in a time when people don’t really care about people much any more. Not even in the churches, as we have become very selfish when it comes to the Church, and so we have to lift our hats to these persons who have put this together and working along with it,” she said.

Pointing out that there are many visions and plans out there that cannot get off the ground, as people are not willing to work with them to fulfil it because they are not at the forefront, she said it’s another reason to celebrate One Connection Group.

“It’s a wonderful thing when you can put your gifts and talent together; and when you can sacrifice your time, talent and money to actually do something to help someone, it is indeed more than a blessing,” she noted. Baldvin McKenzie, Social Development Commission manager for the parish, in praising the group, said people often take things for granted, not recognising how special the group is in the community.

“If you do your research and assessment, you will find out that you are unique. You are setting an example for many, and I can tell you, there are persons learning from you,” he said.

He also praised Rowe for his leadership skills, describing him as a “dynamic leader”.

McKenzie said that every donation is highlighted in their WhatsApp group, to which members have access. He called on other entities to continue giving back to the communities they serve.

The group, which was launched in 2000, now has several subsections under its umbrella, including ‘House Overhead’, which sees members assisting in building houses for each other.

Other subsections in the group are library, sports, prayer warriors, and a charity arm which involves providing assistance to non-group members.