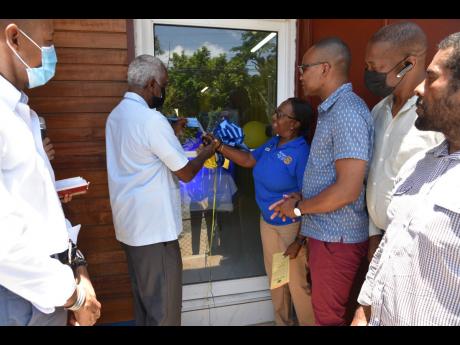 Hospitality training at the Theodore Skills Training Centre in Negril, Westmoreland, has offered more than just a job to Chevelle Thompson.

The 24-year-old, one of several young women pursuing skills training in hospitality services, villa and other property programmes, said that securing a skill has given her another lease on life.

“Have you ever been in a dark place mentally? Well, I have, and I literally felt like nothing I did was good enough,” said Thompson.

“After reflecting on my life and the changes I wanted to make, I saw the Theodore Skills Training Centre as the light at the end of the dark tunnel to escape from my dead-end life,” she explained.

Thompson shared her-life changing experience during a testimonial at Friday’s handover ceremony of a new classroom block by the Negril Rotary Club valued at $20 million.

The Theodore Skills Training Centre has been run by the Theodore Foundation, under the auspices of the United Church of Jamaica and the Cayman Islands, as a non-profit organisation since 2004. It has been empowering young people who are at risk of being exploited in human trafficking and the commercial sex trade by offering opportunities for education and skills training.

More than 1,000 trainees have been enrolled through a partnership with the HEART Trust /NSTA Trust since 2012, and 480 have so far received their certification in food and beverage services, including bartending, housekeeping, general cosmetology, and data operation.

Thompson, who is scheduled to complete her studies later this year, said she now has a brighter outlook since her enrolment.

“In a few short months of my exposure to something different, my outlook on life has changed and I am now focused on being my best self, despite the hard work and challenges I face daily,” the hospitality student said.

“Sometimes I feel like giving up, but my vision is the HEART Trust /NSTA certificate.”

Self-appointed ambassador for Theodore Skills Training Centre, Carol Brown, who honed her cosmetology, bartending and data operation skills at the institution over the last three years, is encouraging young people who are deemed as at-risk to arm themselves with a skill.

The key to that journey, Brown said, is the need to develop soft skills, arguing that without them, the journey towards their goals will be impossible.

“If you don’t have any manners, you won’t get anywhere,” Brown said. “I have become an advocate for the foundation because it has done so much for me and for the other trainees.”

Brown noted that the training centre is arguably the best thing that has happened to Negril.

Shorna Newsome-Myrie, regional manager of the HEART Trust/NSTA, says her agency is proud to be associated with the training centre.

“As an organisation, we are about human capital development, and a major part of what we are about, especially for this financial year, is reaching the at-risk youths within our society. Theodore has been doing a marvellous job in terms of their outreach projects in the communities of Westmoreland, Negril in particular, especially our young people,” Newsome-Myrie stated.

The regional manager said HEART Trust/NSTA was eager to continue to support the project.