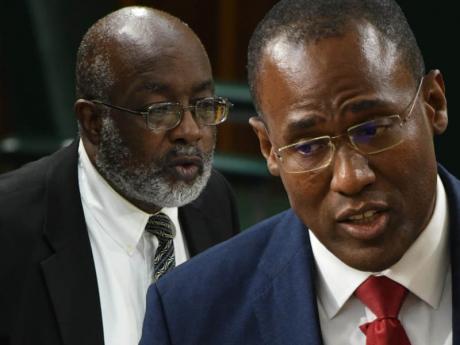 Jackson: "I would have hoped that as the minister for this country his interest would be first and foremost protecting the depositors rather than becoming in my view a spokesperson for the banks." Clarke replied: “I make no apologies to anyone that maintaining financial system stability is a very important priority". -Ian Allen photos

Finance and the Public Service Minister Dr Nigel Clarke and members of the parliamentary Opposition clashed in Gordon House over the vexed issue of high bank fees this afternoon.

During a question and answer session, Member of Parliament for St Catherine Southern Fitz Jackson pressed Clarke on the issue of whether the banks would “collapse” if they stopped charging customers fees against their accounts.

Clarke explained that the fees that arise from “charging individuals or charging the fees on retail individual bank accounts represent a minority of the total fees of financial institutions of the banking conglomerates”.

He said the retail fees represent the smaller part with the larger portion covered by other products and services that are offered.

But Jackson was dissatisfied with the response, saying Clarke did not answer the question.

“If those charges are not made by the banks against depositors' funds, would the banks collapse? I didn't get an answer from you on that,” Jackson again queried.

When Clarke refused to give a “yes or no” answer, Jackson said: “It is regrettable and it's unfortunate because I would have hoped that as the minister for this country his interest would be first and foremost protecting the depositors rather than becoming in my view a spokesperson for the banks”.

“I utterly and completely reject the member's assertions," he said.

The finance minister argued that the stability of the financial services sector is an integral part of macroeconomic stability and that "without financial system stability the economy cannot function, people cannot go about their business, businesses cannot flourish and jobs cannot be maintained.”

He recounted that the country went through financial instability in the 1990's with the financial sector meltdown.

“I make no apologies to anyone that maintaining financial system stability is a very important priority not only of this government but of any government that is devoted to the people of Jamaica,” he said.

However, Opposition Leader Mark Golding contended that the discussion was not about a tradeoff between financial system stability and consumer protection.

Golding said the Opposition's stance is that there should be a legislative intervention to protect consumers who are subjected to excessive costs to carry out basic banking transactions.

He reminded his colleagues that Jackson had brought legislation to the House twice to address bank fees. One was voted down by the government side while the other has been languishing on the order paper for some time now and has not been debated.

Golding said the Opposition did not differ in any way from the government on the issue of financial sector stability.

However, Clarke said he raised the issue of the financial sector stability owing to what he said was the “frivolous” nature of Jackson's question.

Clarke said Jackson should not have asked about the collapse of the financial system.

He charged that the largest banking sector crisis that Jamaica and the Western Hemisphere have even known happened under a government led by the now Opposition People's National Party.