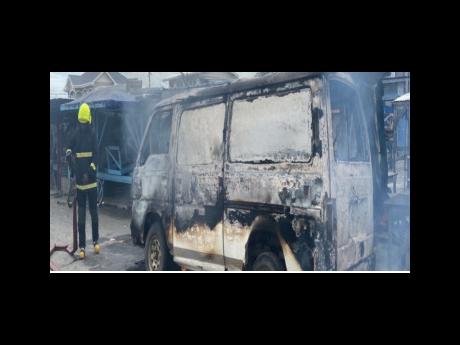 Fireman cooling down a vehicle burnt by protestors on Tuesday. -CMC photo

(CMC) - President Irfaan Ali Tuesday said that the protest by residents over the alleged release of a police officer linked to the murder of a young man, “is not all about justice” and that “a man threatened my life”.

President Ali in an earlier broadcast had urged residents on the East Coast Demerara to allow the Police Complaints Authority to do its work as the Guyana Police Force denied reports that a policeman who allegedly shot and killed a resident several days ago had been released.

“I am assured by the Chairman, retired Justice Ramlall, who has advised me that by very early in the new week, he is hoping that by Monday, he will be in a position to present his report to the DPP”, President Ali said In a televised statement from State House.

Ali told the nation that he had also been informed that a second police officer is now in custody assisting the investigators with the probe. He maintained that the two police officers are still in custody and the probe ongoing and therefore sees no basis for the protests.

But as the protests continue, Ali in a statement on his Facebook page wrote: “Today, a man threatened my life. And, the Member of Parliament who filmed it did not denounce the statement”.

But he said while he has been receiving an “outpouring of love and support” he would be “asking for the Parliament to pass a unanimous resolution decrying political violence and threats of assassination.

“Because, in order to build one Guyana for all, we must speak with one voice that threats of political violence and assassination will not be tolerated in our democratic society.

“Regarding the underlying issue, I am assured that the police officer who allegedly shot and killed the young Quindon Bacchus remains confined to Police HQ and is under active and expedited investigation. We encourage justice to be done.”

Ali wrote that the police must protect people's lives and properties and that “it is now obvious this is not all about justice for Quindon Bacchus.

“It is now barefaced theft, damage to property and outrageous lawlessness by some. The police must arrest those who are openly damaging public and private properties and stealing from citizens. Those instigating this lawlessness must also be brought to justice.  As a democratic society and country, we must never allow this. Our collective voices must condemn it now,” President Ali said.

Earlier, the police called on the members of the public “to desist from this illegal act” of blocking the road.

“The Guyana Police Force would like to debunk the false claims being made that the policeman involved in the shooting death of Quindon Bacchus was released from police custody. In fact, the police rank in question is under open arrest and confined to Police Headquarters. The matter is still under investigation,” the police said in a statement.

It warned residents against blocking the road “which is disrupting the flow of traffic” and is also “urging persons to desist from this illegal act and clear the roadway”.

Media reports said that a senior police officer and a traffic policeman were forced to beat a hasty retreat by angry residents, who blocked the road at several other points with old wooden stalls, wooden planks, posts and concrete objects.

Bacchus was shot several times and killed on June 10, this year. There are two accounts- one that Bacchus attempted to sell the undercover policeman a handgun and the other that the two had a previous misunderstanding.