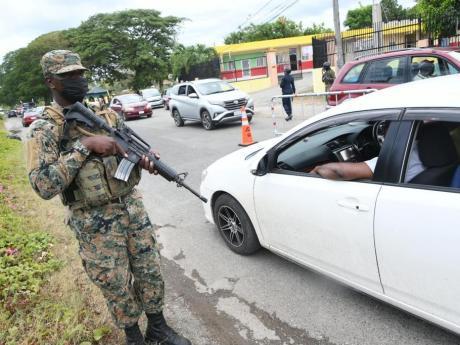 Members of the security forces at a vehicular checkpoint along St John’s Road in Spanish Town, St Catherine on June 17, 2022.

The Opposition wants the Government to use the Zones of Special Operations (ZOSO) legislation when the State of Public Emergency in St Catherine expires.

It is arguing that this will allow the security forces to maintain law and order in hotspot communities without abrogating the constitutional rights of residents.

The enhanced security measure was declared on June 17 but after 14 days, the government will need support from the Opposition if it wants it to be extended.

The government has the numbers to carry the motion in the House of Representatives but it will need the backing of at least one Opposition member in the Senate.

The government proposed the new SOE regulations in the House last Thursday after admitting that the ones introduced two days earlier were not correct.

Recent court rulings on past SOE regulations have forced the Holness administration to revise the procedures to comply with the Constitution and Jamaicans' rights to liberty and freedom of movement.

Opposition leader and People's National Party president Mark Golding on Sunday stated that it will not support the regulations.

The party reiterated that stance in a statement issued on Monday in which it stated that it wrote to the Attorney General indicating its position and outlined concerns.

Among the issues raised by the party are the circumstances under which persons can be detained, the length of detentions and the involuntary fingerprinting of persons and the retention of those fingerprints after release.

It also raised concerns about the framework governing the detention review tribunal.

In addition to using ZOSOs, the opposition is calling for the government to bring to Parliament the long-awaited Enhanced Security Measures Bill.

It is asserting that this legislation should significantly assist the security forces to achieve the goal of preventing known violence producers from carrying out acts of criminal violence, while simultaneously respecting the rights of Jamaicans.