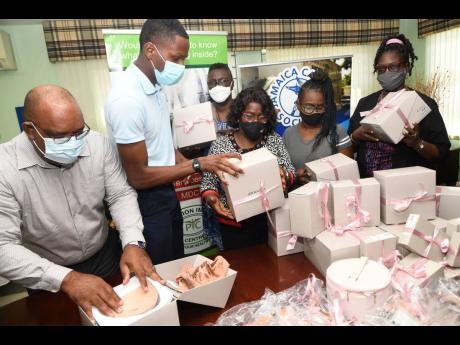 Acting executive director of the Jamaica Cancer Society (JCS), Michael Leslie, has hailed the donation of 15 prostheses and brassieres for breast cancer survivors by 18-year-old Derrick Bernard as a historic gesture by a young man to assist women who have lost one or two breasts.

Bernard, an international baccalaureate student at Hillel Academy in Jamaica, donated the items to some breast cancer survivors on Monday at a handover exercise at the JCS’s offices on Lady Musgrave Road in St Andrew.

The young volunteer garnered support from other breast cancer survivors, doctors, and Precision Imaging Centre to acquire prostheses and brassieres for the women in need.

The young academic told journalists that he was eyeing a career in the area of breast radiology or plastic surgery to assist women who have had to undergo mastectomies as a result of breast cancer.

“This is just a drop in the bucket, so we still need more donations,” Bernard said. “It is all about giving back. This is an inspiration to other young men in Jamaica. There is a negative stigma around us nowadays, so I want to use this as an inspiration for us to start fundraisers in our communities, in our churches, in our homes, and in our schools. Anybody can give back and be a light in your own little corner.”

Bernard said that he wanted this to be the start of a long-term relationship with the JCS to help those in need.

In November 2021, Bernard said he was first inspired to assist women who had gone through chemotherapy and lost their hair by donating wigs to them. However, he decided to seek funding to obtain special brassieres and prostheses for women who lost their breasts.

Leslie, the JCS acting head, thanked Bernard for the thoughtful initiative, noting that it was heart-warming “when an 18-year-old ... sees the need of our ladies here who have lost a part of their bodies, have lost a breast, have lost two breasts, and the need to feel and get their confidence back and they get a breast prosthesis”.

The JCS boss explained that there were many women who could not afford the prosthesis and had resorted to walking around with a cloth or sponge in their bosom, which was not the ideal thing for them.

He lauded young Bernard for stepping forward and understanding the needs of breast cancer survivors.

Hygena ‘Genie’ Reid, a breast cancer survivor who benefited from the donation, expressed gratitude to Bernard.

Nine-year breast cancer survivor Eulalee Callum also said she was very happy about the initiative, noting that a prosthesis “makes a woman feels complete when she has lost a part of her. So I am very thankful, and I thank this young man for taking the step to help women because there are a lot of women in Jamaica who really need this help”.

Breast cancer is the number one cancer affecting women in Jamaica, with roughly 43 out of every 100,000 women inflicted.

In a Gleaner interview, Derria Cornwall, head of the Women’s Imaging Centre at the University Hospital of the West Indies, said it is projected that one out of every 21 women in Jamaica will get breast cancer in their lifetime.

Globally, it is estimated that one out of every eight women will get the disease.

“When breast cancer hits, it can be quite costly, not just in the treatment, but in regaining the self-image after the treatment,” Cornwall said, noting that if not detected in the very early stages, treatments costs can go into the millions of dollars.

Cornwall said that lifestyle practices can help to prevent breast cancer and as such, she encouraged women to lose excess weight; avoid alcohol; exercise regularly; and get enough sunshine, which produces vitamin D to fight cancer.

She urged women aged 40 and over to do their mammograms annually, so that “if the thief of cancer is trying to break in your house, you can catch the thief early so that you can get rid of him and throw away the key”.