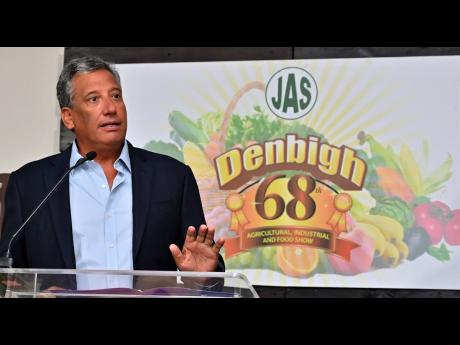 Contribued
President and CEO of the Jamaica Broilers Group of Companies, Christopher Levy, addressing the recent launch of Denbigh 68.

Jamaica has been warned to brace for much greater economic shocks from the geopolitical tension created by the Ukraine-Russia war, as the island’s food security faces increased threats and supply chain issues impact local businesses.

President and CEO of the Jamaica Broilers Group, Christopher Levy, at the recent of launch of the Denbigh Agricultural, Industrial and Food Show 2022, warned that Jamaica should brace for further economic fallout.

According to Levy, who heads the country’s largest commercial poultry meat producer, this is based on forecast by top investment bankers in the United States who have alerted him to the impending larger economic shocks as food supply chains are disrupted and prices soar.

The Jamaica Broilers president said he has conveyed this to Finance Minister Dr Nigel Clarke, because the Government needs to implement policies to cushion the blows to the economy. Levy pointed to the fact that the instability in Europe has wiped out one-fifth of the world’s supply of wheat and India, the world’s largest producer of sugar, has ceased exports.

During the launch event held in the conference room of the Jamaica Broilers Group, at McCook’s Pen, St Catherine, Levy pointed out that the impact will be felt in three main areas: food supplies, stock market and soaring inflation.

“This is relevant to your country, you need to understand that with inflation, remittances are at risk and you need to run models on remittance reductions and how that will play into your nation. And when somebody shares with me (such information), I feel such responsibility that I pass it on to the leadership, and I spoke to Minister Clarke,” Levy shared.

Levy noted that the level of uncertainty and disquiet in the world today is unprecedented, with leaders being forced to make decisions in such a short time frame that it is uncomfortable.

“It’s the same thing here in Jamaica Broilers. We are in a space where things are happening so fast that you have to be so agile in our decision-making that it’s unusual and very disquieting because you want more information to make your decisions and you don’t have that luxury of time.

The 68th Denbigh Agricultural, Industrial and Food Show will take place from July 30-August 1, at the Denbigh Showground in May Pen, Clarendon. Organised and hosted by the Jamaica Agricultural Society, it returns after a two-year break due to the COVID-19 pandemic, under the theme ‘Grow Smart, Eat Smart’.