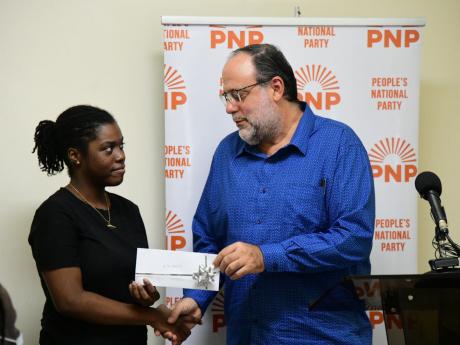 Aliya Johnson, one of the Jamaican students who fled Ukraine in February, accepting her $75,000 grant from Leader of the Opposition and People’s National Party president Mark Golding on June 29, 2022. –Gladstone Taylor photo.

The 22 Jamaican students who were forced to flee Ukraine in the wake of the Russian invasion in February are to each receive grants valued at $75,000 from the People’s National Party (PNP) to help defray expenses as they apply to other universities to continue their studies.

At least five of the students were presented with cheques today.

The other students are expected to collect their cheques at a later day as they were said to be unable to be at today’s ceremony.

Leader of the Opposition Mark Golding, who handed over the cheques to the students and parents who filled in for their children, urged Corporate Jamaica and the Government to provide additional support to the needy students.

Noting that two of the former Ukrainian students were from his St. Andrew South constituency, Golding said that the plight of the group had touched his heart when he heard the pleas from parents, grandparents, and students who were in the eastern European country.

The US$10,000 raised by the party was given to the Ministry of Foreign Affairs to distribute to the students.

Golding said he was perturbed after the ministry wrote to inform him that it had been instructed by the financial secretary to transfer those funds from the ministry’s account to the Consolidated Fund.

At that point, Golding said he was still of the view that the money would be used to benefit the students.

However, Golding said that a subsequent letter from the ministry stated that a determination had been made to use the PNP’s donation to reimburse the Government for part of the cost of transporting the students to Jamaica.

He said he found that development inappropriate against the backdrop that the Government had pledged to fully fund the cost to bring home the students.

“I felt that that was the Government’s contribution. I think that more should be done and should have been done but we were glad that those costs were covered but our funding should not be used to reimburse the Government for that.”

The Opposition leader said he wrote the Government “in fairly strong terms asking them to confirm that they would make those funds available to the students”.

Golding said that requests for financial support continue to come from the students who left Ukraine saying ‘help us we have a lot of costs that we never envisaged that we have to bear’.

Georden Shaw, who studied medicine in Ukraine, thanked Golding on behalf of the group.

“From the onset of the invasion, he never left our side. He kept in constant contact with us, he encouraged us and supported us and it is rare that you find someone who is in such authority supporting youth and we are really appreciative.”