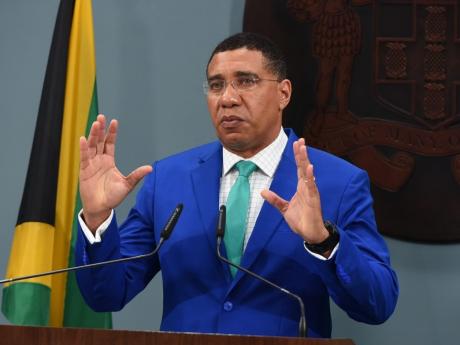 Holness: “Ultimately, in this matter, the Government would not seek to use its security forces… to forcibly remove anyone unless it was absolutely necessary. But we ask our citizens to think carefully about the possibility that they could be marooned." - Contributed photo.

As Jamaica braces for an active hurricane season, Prime Minister Andrew Holness, is encouraging Jamaicans to heed the warnings and evacuation orders that may be given by the Office of Disaster Preparedness and Emergency Management (ODPEM).

Holness, who was addressing the recent National Disaster Risk Management Council meeting at the Altamont Court Hotel in St Andrew, noted that given the prediction of an above-average hurricane season this year, it is imperative that citizens prepare for disaster-related eventualities such as evacuation.

“The security forces will endeavour to maintain law and order and security at all times. The resources of the Jamaica Urban Transit Company Limited (JUTC) will, again, be utilised to facilitate evacuation support, should the need arise,” he said.

Recalling that there was a disaster in the past where the Government sent buses to evacuate persons, but they refused to go, the Prime Minister assured that the administration “will always send the buses and we will wait as long as we can without putting the drivers and the buses in danger.”

“Ultimately, in this matter, the Government would not seek to use its security forces… to forcibly remove anyone unless it was absolutely necessary. But we ask our citizens to think carefully about the possibility that they could be marooned. There could be a disaster that impacts them and their family and their property and it would require them to move at short notice or to relocate, and they should be mentally prepared for this,” he said.

Holness noted that a disaster occurs quickly, so citizens will need to be prepared to accept that they may have to be separated from their property.

“The public…[will] have to weigh the options carefully, that it might be more dangerous staying with their property than leaving their property,” the Prime Minister emphasised.

The 2022 hurricane season officially began on June 1 and will end on November 30.

The US National Oceanic and Atmospheric Administration has predicted a 65 per cent chance of an above-normal season.