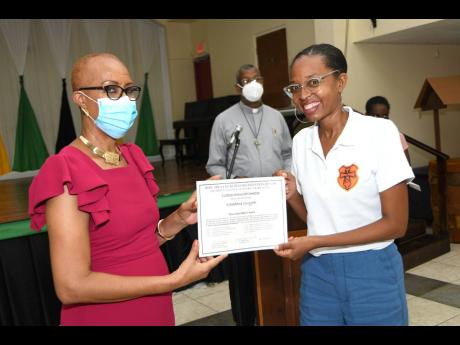 Rudolph Brown/Photographer
Fayval Williams (left), minister of education and youth, presents certificate to Khadene Guyah, one of the trainers at the Hope Area Churches Organisation (HACO) Values and Attitudes ‘Train-the-Trainers’, course at an awards ceremony at Sts Peter and Paul Church Hall in St Andrew on Sunday, June 26. 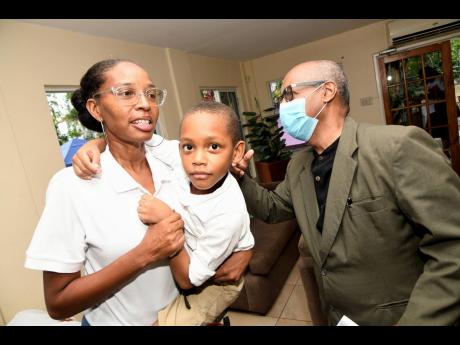 Rudolph Brown/Photographer
Rev Gregory A Morris, of the Mona Open Bible Church, chats with Khadene Guyah, one of the trainers, and her nephew Riain Banton at the Hope Area Churches Organisation (HACO) Values and attitudes ‘Train-the-Trainers’ course awards ceremony at the Sts Peter and Paul Church Hall.
1
2

If there was a local movie called The Art of Forgiveness, Khadene Guyah would have been the perfect star for it.

Turning point of the movie for her would have been on March 17, 2021. That is the day she tragically lost her husband, Kedo Guyah, a former teacher at the Norman Manley High School and assistant pastor.

“What happened? We just spoke. I was preparing for an assignment, because I’m pursuing a master’s in psychology and I had consultation the day, and it was my first day, and I was happy speaking to my head of department and so he came in and he asked me what I wanted, because he was going to the supermarket, and I asked for something to drink, and he got something to drink and something to snack on, and he left with my nephew [a child they both adopted and were mutually taking care of] to assist his brother in changing a tyre,” Guyah explained, as she recalled her most dreadful day to date during an interview with The Gleaner.

She continued: “When they stopped at the tyre shop on Spanish Town Road, a gunman came or some men came in a car. I gather it was a contract killing for somebody else. He was there, so he was shot as well.”

Richard Williams, a 37-year-old tyre repairman, was also killed at the tyre shop.

The nephew they both cared for as their own since he was two years of age was in his arms while he was shot, but luckily the child was spared. She said she would normally accompany her husband wherever he would be going, and if she never had school, she would have been there, too.

“I could not understand. It did not make sense. I just finished consultation. I got home and his brother called, and it was a shock, because I just spoke with him and he went to help his brother. That’s something that’s not uncommon,” Guyah told The Gleaner.

While reflecting, Guyah recalled how she grew up in an inner-city community, ensured that she worked hard to change her standard of living, and eventually end up losing her husband to the inner city.

The widow said the transition to becoming a single parent/guardian for her nephew has been a new phase of life she never planned for. She had to adjust her approach to life, how she studies, manages her days and cares for the child by herself.

Embracing the loss of her husband and forgiving his killer has not been an easy reality. Like many depressed persons, she has moments when she breaks down and cries, and moments when she feels an unwavering feeling of sadness. But one thing is for sure, her faith in Christ has been the driving force for her to get out of bed each new day and start afresh.

“I’m a Christian, so that’s the baseline for everything I do, so having my faith in Christ, He gives me hope beyond what this world has to offer. It has been challenging, but as I make that decision each day to get up and go and knowing that God is with me and He will help me and He will provide all the resources be it personal, financial, whichever, I am assured of his presence, and that helps me on a daily basis,” Guyah explained.

“[However], the first first thing when it happened, I’m thinking, as a ghetto person, you’re exposed to certain things, [and she questioned] ‘Why not?’ The person should feel as much pain as you’re feeling. Then you realise that the persons who might have been involved are just victims as well, and so we have to make a decision to stop,” she said.

With family support, support from the Victims Support Unit, Caribbean Graduate School of Theology, Mona Open Bible Church and Methodist churches, she has been able to fight to overcome her challenges in the last 14 months.

One of the more recent courses which assisted her in finding her way was the Hope Area Churches Organisation (HACO) Values and Attitudes ‘Train the Trainers’ course. It was presented over 10 weeks to 14 persons from 10 churches within the Mona and Papine division of St Andrew.

The training forms part of the Government’s efforts to reduce crime and violence within communities, with a targeted approach to instilling moral values.

Implementation of the training was done under the Ministry of Education and Youth’s ‘Respect Agenda Campaign’ and is aimed at empowering ambassadors to organise similar training courses for members of their communities.

The participants were presented with certificates during an awards ceremony held at the Sts Peter and Paul Church in St Andrew on Sunday, June 26.

Some of the core values taught during the course includes: respect, self-discipline, social responsibility, honesty, family life and obedience to rules.

At the awards ceremony, Fayval Williams, minister of education and youth and member of parliament for St Andrew Eastern, where the HACO is based, said the training is an “important addition to efforts being made across the country to reawaken a sense of civic duty, respect for self and others”.

“We have a generation of young people that we need to save. If we do not intervene, the result would be worse than what we have now,” she said.

One of the reasons Guyah joined the course is so that she can be more prepared to reach out to other persons who are in need.