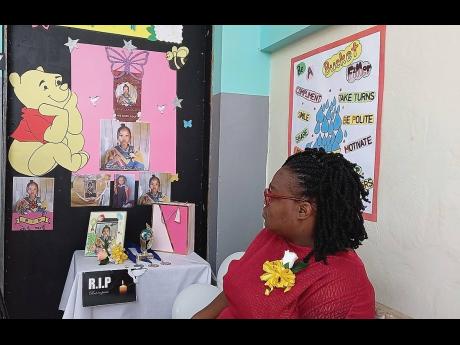 Photo by Olivia Brown
Infant teacher Tamar Blair-Robinson sits by the memorial mounted in honour of her former student, five-year-old Rafaella Smith, during the graduation ceremony at Beulah All Age and Infant School last Friday.

An empty chair among young graduates at Beulah All-Age and Infant School’s graduation on Friday was a stark reminder of the brutal murder of five-year-old Rafaella Smith, one of the victims of the Cocoa Piece bloodbath that jolted the nation on June 21.

Rafaella’s 12-year-old sister, Sharalee Smith, was also a student at the school, which is located in New Longville in north-central Clarendon.

The siblings, their mother, Kemesha Wright, 31; their older sister, Kimanda Smith, 15; and 23-month-old half-brother, Kishawn Henry Jr, were found at their New Road home with their throats slashed.

Rushane Barnett, 23, has been charged with the gruesome murders.

A cloud of sadness dampened the usually celebratory spirit associated with the event, as there were several moments of silence to remember the slain children.

Tamar Blair-Robinson, Rafaella’s teacher, wore a face of despondency as she sat next to a memorial mounted in her student’s honour.

The memorial displayed photographs of a happy Rafaella and awards she was to collect at Friday’s ceremony for outstanding academic performance.

Blair-Robinson fought to hold back tears as she spoke of her star student. She told The Gleaner that preparing the memorial for Rafaella was no easy feat.

“Even when I saw them singing the graduation song, I broke down in tears, because I’m just looking for her in the crowd and she’s not there, and seeing her photos there ... it’s just really sad,” Blair-Robinson said.

The teacher said she was anticipating graduation day to see her star student shine.

“I worked hard with Rafaella just for this day and just not seeing her there ... it’s just too much not seeing her here to collect her award,” bemoaned Blair-Robinson.

Similar sentiments were expressed by the school’s principal, Nadine Gayle-Little, who described the day’s activities as bittersweet.

Gayle-Little said that the administration wrestled with what was a tough emotional decision to reserve the memorial area for Rafaella, but decided to do it nonetheless.

“This little girl would have graduated, would have been sitting there. You heard the song from the [infant] graduating class, We Are The World. Such a beautiful song message, and Rafaella would have been a star in that song,” said Gayle-Little.

Sharing in the celebration and grief was Fayval Williams, minister of education and youth.

Williams lauded the staff at Beulah for their dedication and commitment to seeing an exceptional execution of the curriculum.

The minister also committed to financing upcoming projects for the school.

“The Ministry of Education and Youth will match every dollar that you raise for the fencing, and I think by now persons in the education sector should know that I don’t just talk on air, I follow through with what I say,” Williams said.