Investigations are ongoing, police appeal to citizens to come forward with information 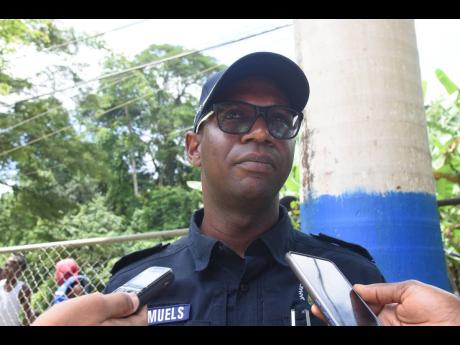 Ashley Anguin
Superintendent of Police in charge of Operations in the St James division, Eron Samuels, being interviewed following the official opening of a new park and greenspace at the Lethe Primary and Infant School in Lethe, St James, on Thursday, June 30.

The St James police have informed that there are no fresh updates into the killing of nine-year-old Gabriel King’s earlier this year, which sparked national outrage and prompted calls for information to aid the authorities’ probe.

Speaking to journalists at last Thursday’s official opening of a new greenspace at Lethe Primary and Infant School in Lethe, St James, superintendent of police in charge of operations for the St James Police Division, Eron Samuels, said that no briefing had come in regard to the case.

“I am not in a position to comment, as I have not been properly briefed on that as yet in terms of the investigation. That is still continuing, and we are just awaiting the fulsome report from that investigation,” said Samuels.

There has been much public criticism regarding the apparent lack of new leads into the investigations surrounding young King’s abduction and murder on January 13.

King, who was developmentally challenged, was abducted from his mother along the Tucker main road in St James, after she was reportedly carjacked by assailants, who dragged her from her motor car and took the vehicle with the child still in the back seat.

The car was later found abandoned off the Fairfield main road in Montego Bay, and King was found in the rear of the vehicle with his throat slashed.

In response to criticism about the lack of public updates in the matter, Senior Superintendent of Police Vernon Ellis had told January’s sitting of the St James Municipal Corporation that the investigation up to that time was ongoing, but that any information had to be released in a way that would not compromise the police’s progress.

Calls have also been made for the members of the public to come forward and tell the police what they know about the case, and for the Child Development Agency and other child-focused organisations to be more proactive in handling child killings.

In the meantime, Samuels gave a brief update into the police force’s efforts to curb crime in rural sections of St James, to include communities like Anchovy, Bickersteth, and Cambridge.

“What we have found out is that there are several criminal gangs that have formed within the interior of the division, in areas such as Spring Mount, Maroon Town, Anchovy, Cambridge, and Bickersteth. It is nothing new, because if you recall, we have the Prekeh Gang which was based in Cambridge ... some of the offshoots of that gang are operating within the Anchovy space based on the proximity,” Samuels said.

“In these areas with these gangs, it is easy to avoid the police working in the hills, as the terrain itself provides a cover for them. However, we are doing a lot of work based on foot patrols and targeted operations within the space, to try and see if we can bring these persons to justice,” he added.