Art and heritage go up in flames in Portland 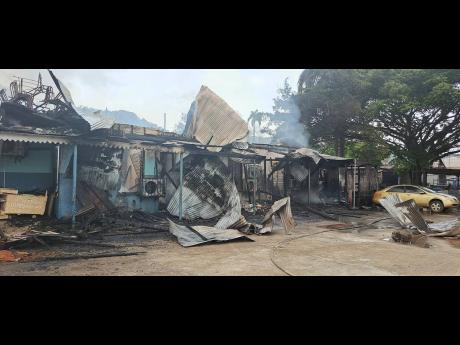 Gareth Davis
The remains of the old Jamaica Railway Corporation building that was destroyed by fire on Saturday in Port Antonio, Portland. 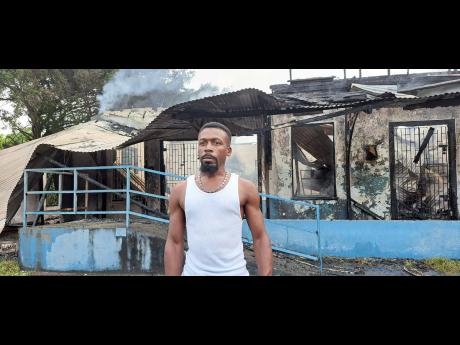 The loss of the art gallery, which is renowned for its ability to attract and groom students, has been deemed a major setback for art/cultural landscape in that section of the island, according to mayor of Port Antonio Paul Thompson, who has purchased paintings from the gallery.

“It is a crippling blow to art in the northeast region of the island that now has to grapple with the destruction,” he said.

“This is a huge loss and the entire culture of the northeast region will be impacted, as this facility also served those that are artistically inclined from other parishes. The gallery produced some of the most distinct paintings, which reflected and depicted Jamaica’s rich heritage and culture. It was a facility that assisted greatly with the nurturing and tutoring of high-school students, who developed the desire for art,” Thompson stressed.

Operator of the Portland Art Gallery, Zaccariah Ireland, told The Gleaner that he received a phone call shortly after 4 a.m. that the building was on fire and, when he rushed to the location, the entire building was engulfed in flames.

“I feel like a lost everything. This building is dear to life and it meant so much to us. We extended our services to students, who were taught the art of painting on a daily basis,” Ireland said.

“I have been operating at this location for more than 16 years and this is a huge loss that has affected not only us as artists, but also students from the Youth Information Centre, who used that facility every day, and also the Portland Marching Band. It is going to be tough picking up the pieces, as we lost valuable paintings and equipment, material that were partially finished, and also paintings that we would have received payment for.

“So, it is definitely going to be a challenge going forward, but the first step would be to identify a suitable location to resume what we do best, where we will also be able to accommodate students from the various high schools. The loss is, indeed, great and we will definitely be needing assistance to continue or work,” he added.

Artist Mark Bell, who is responsible for painting the mural on the walls of the CC Bakery, depicting the Rio Grande and Nanny of the Maroons among other things, was still in a state of shock as he struggled to come to grips with what he described as a huge loss.

“Mi nuh know wah (what) fi say. Dis is too much and we lose everything. I don’t even know where to start,” he lamented.

Firefighters have not yet determined the cause of the fire. However, preliminary estimates have indicated that the loss could amount to more than $12 million.

The destruction of the art gallery is a major blow for more than 10 artists who operated from the gallery’s facilities on a daily basis.

The old railway building, which underwent a transformation following the collapse of the railway service in 1980, was rehabilitated and was being used to accommodate a youth information centre, the Portland Art Gallery, and the headquarters for the Portland Marching Band.

It took three fire units, two from Port Antonio and another from Buff Bay some 18 miles away, to fight the raging inferno. Several privately owned water trucks were also seen at the location, assisting with the blaze.

Meanwhile, Member of Parliament for Eastern Portland Annmarie Vaz, who initiated the painting of the mural, told The Gleaner that plans were far advanced to secure funding for the restoration of the historic railway building, which, she said, is a part of the parish’s heritage.

“The area has become iconic to Port Antonio, resulting in persons becoming engaged in photo shoots at that beauty spot, which was created to enhance the beauty of the town,” said Vaz.

“It is a sad day for Portland and myself and other stakeholders will have to come up with a plan, a rather quick one, to see how best we can get the livelihood of these people up and running again,” she promised.