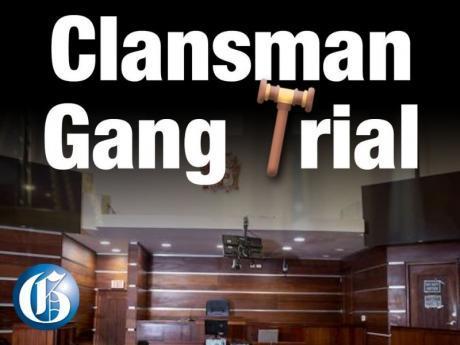 Charging that this morning's sitting of the Clansman-One Don Gang trial was 'a grand waste of his time', Chief justice Bryan Sykes stormed out of the courtroom after abruptly adjourning the matter for the day.

The judge had yesterday instructed the Crown to examine records from the Horizon Adult Remand Centre and Spanish Town Police Station from which evidence is currently being adduced as part of the defence's case.

The records concern the admission and dispatch details for four defendants who are seeking details to prove that they were in custody when the prosecution is alleging that they had participated in criminal activities with the alleged gang.

When the trial resumed this morning, a senior staff officer from the correctional facility was called to the witness stand to provide information pertaining to defendant Pete Miller.

Based on the information, which the witness had documented in the dispatcher's book, he testified that Miller was dispatched from the facility to the Kingston and St Andrew Parish Court on March 7, 2017.

However, the judge became rattled after Miller's attorney Gavin Stewart requested the help of the court attendant to show the prosecution the information in the book.

"What is the meaning of this?" the obviously peeved judge asked before telling both parties, "This is a grand waste of my time."

"This passing around and so on is wasting time," he stressed.

While questioning what other records are there to be examined, the judge reminded the prosecution that he told them to look at the documents.

"Have all the records examined so we don't waste time in court," he warned before quickly adjourning the matter.

The four defendants, Kalifa Williams, Pete Miller, Tareek James and Donavan Richards, who are yet to close their cases, are among 28 defendants remaining in the trial.

The trial will resume tomorrow.