Growth & Jobs | ‘We have to protect them’ 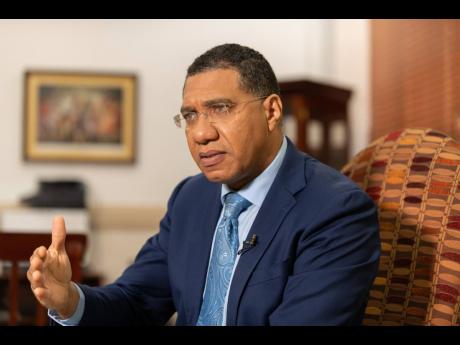 Prime Minister Andrew Holness has appealed to the country’s senior citizens, 75 years and older, to sign up to benefit from the support under the Social Pension Programme.

“They are entitled to it, even if they were not employed or were not contributing [to a pension], because we have taken the position that the vulnerable in our society, we have to protect them,” he said.

“In this very difficult time, with prices skyrocketing and the volatility in the energy markets. It is the vulnerable who are not on any income at all or are on fixed income, retirement income, who are probably feeling it the worst,” he added.

The prime minister was speaking during a visit to 105-year-old Winnifred Stern’s Lords Road home in Kingston on Friday, July 1.

Holness said seniors without a pension are unable to go out and “hustle” for money or find alternative means of income. He noted as well that their children may not be able to take care of them, hence the importance of putting in place this social pension.

The Social Pension Programme targets seniors who are not currently in receipt of a pension, retirement, old-age or disability benefit or income and are not living in a government care facility, and are generally described as vulnerable.

While encouraging seniors to register for the benefit, Holness pointed out that the Government is not passively waiting on persons to come in and register.

“We have hired over 300 youngsters and deployed them all over the communities to actually find persons who qualify, because we have allocated the resources for it. We want to see the take-up increase, because that will increase the well-being of those who qualify. It is an important part of the Government’s response to crisis, particularly as it relates to being able to just meet the basics, like food,” he said.

Permanent Secretary in the Ministry of Labour and Social Security, Colette Roberts Risden, who accompanied the prime minister on the visit, explained that eligible persons who wish to access the social pension may visit any one of the ministry’s parish offices to fill out the application.

For seniors who are unable to visit the offices, their caregiver, or someone acting on behalf of that senior, can submit an application to the ministry.

“We will do the verification. We now have … a little under 10,000 persons enrolled, and we have capacity for another 10,000 persons to be registered, so we are aggressively trying to encourage our seniors, or persons who know of seniors who have no pension,” she noted.

The senior citizen or a representative will be required to complete an application form, accompanied by the individual’s Tax Registration Number and proof of age in the form of a birth certificate or a valid passport.

The Prime Minister’s visit to Ms Stern formed part of the post activities for Centenarians’ Day, staged annually by the labour and social security ministry, where persons who have reached 100 years and over are recognised.

Centenarians’ Day was observed on May 20 under the theme, ‘Healthy Ageing: Promoting Intergenerational Wealth’.