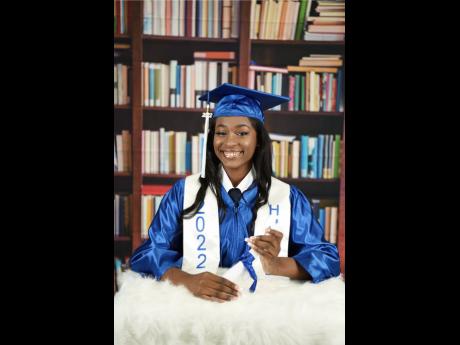 SEVENTEEN-YEAR-old Adrianna Parry, who recently graduated from H.J. Robinson High School in Grand Turk in the Turks and Caicos Islands, is crediting her Jamaican background for graduating with the second-highest average in the country.

Parry, who was born in St Andrew, spent three years in Jamaica living in Pennants, Clarendon, before migrating in 2008 with her parents Adrian and Sherene Parry, who are music and information technology teachers, respectively. She has been on the honour roll for most of her high-school years. Over the years, Parry received many awards but, for her, the one that is closest to her heart is the Deputy Governor’s Leadership Award.

“Attaining such close averages throughout my academic life just proves to show how consistent and determined I was and am to do well. For that reason, I am nothing but proud of myself,” she said.

She said there were times when exhaustion would set in and she was tempted to give up, but Parry said the ‘Jamaican’ in her kicked in and her sense of discipline and determination kept her going.

“I refused to, because I knew what I wanted for myself. I wanted to excel as a Jamaican in a foreign country. There were many people who did not like this and tried their very best to fight against me, but I really just blocked them out. There will be persons like that wherever you go, right?” she quipped.

During the fourth year of high school, it got harder for her as she was diagnosed with Tourette’s Syndrome – a condition that causes a person to make involuntary sounds and movements called tics. She said one day she would be fine and, the next, she wouldn’t stop twitching.

For her, those were the lowest days of her life, making it physically and mentally draining.

Facing life’s challenges was made easier with the strong support of her parents, who Parry credits for motivating and encouraging her to stay the course during the rough times. She also credits her faith in God.

“There were times I couldn’t eat without flashing the fork out of my hand or even write in my classes. Despite this, I trusted God because I knew He would make a way … and He surely did,” she said triumphantly.

“Unlike some students, I can say that I never felt pressured by them, as they always assured me that certain grades and positions would never make me less than the person I am. They cared for me physically, spiritually and, most importantly, mentally. My mental health is one of my top priorities and I found peace in knowing that my parents cared for it just as much as I did,” she shared.

Looking ahead, she said her goal is to become a neurosurgeon, as she really wants to be someone who can make a change in society.

“I want to be someone who others can look up to and someone who can positively impact others’ lives. I want to be a leader who serves others, just like Christ was,” she said.