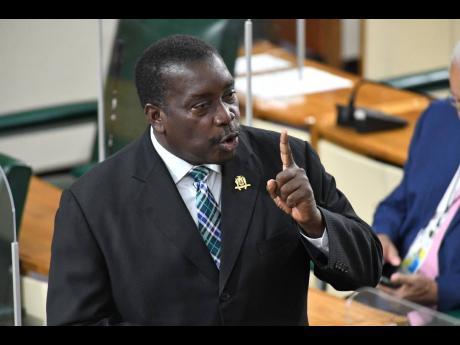 Montague: "Their customers, my voters, my constituents, and the people are now left with a situation where you can’t get cash, you can’t get banking service, the ATMs are not working. So who compensates?" - File photo.

Lawmaker Robert Montague used this morning's sitting of the Standing Finance Committee to launch an attack on the banking sector, arguing that its policy decisions are hurting St Mary residents.

Bank of Jamaica (BOJ) Governor Richard Byles and his team, which included Senior Deputy Governor Wayne Robinson and Deputy Governor Robert Stennett, along with Finance Minister Dr Nigel Clarke faced the brunt of Montague's frustration after they indicated that sufficient legislation did not exist to regulate the sector.

However, they indicated that a banking bill has been drafted to address this.

The BOJ was before the committee to review its quarterly monetary policy reports.

Montague told the committee that all the banks operating in rural St Mary, where he serves as the member of parliament for St Mary Western, have “suddenly” gone cashless, "without a thought for the people".

“Their customers, my voters, my constituents, and the people are now left with a situation where you can't get cash, you can't get banking service, the ATMs are not working. So who compensates?” he questioned.

Additionally, he told the committee that a system now exists where transactions are picked up by third-party institutions but not credited to customers' accounts for months, resulting in banks charging customers for overdrafts.

“So where can this customer run to for protection?” Montague stressed.

He also said that there have been breaches of customer confidentiality and raised concerns about the possibility of third parties selling customer information.

Byles said that a complaint could be made to the BOJ which would then investigate the “egregious action” with the offending bank.

However, Montague was not satisfied and demanded that specific answers be provided that he could relay to his constituents.

Committee chair Heroy Clarke sought to close off on the matter, noting that the BOJ and the finance minister had taken account of what Montague reported and that the matter could further be ventilated at a meeting of the Human Resources Committee of Parliament because time was against the group.

But Montague doubled down on his position, insisting that committee members were sent to represent constituents and did not care about time constraints.

“We were sent here to represent them; let me remind you. And today, yesterday, last week, last month, even Keisha that the [finance] minister always talks about, is facing difficulties. What about them? These people have invested their votes in us to make life better for them, not to put on hardships,” he said, stressing that action could be taken before the finance minister tables the new banking bill.

The committee chairman again urged Montague to end the discussion but he would not let up, charging that MPs were elected for five years and not until the 12:00 p.m. wrap-up time of the committee.

“I came here from St Mary to air these matters and to get some resolution. Not to come here until 12 o'clock. That's not why the people sent me here from St Mary. Are you saying that the people's business is not as important that we have to run out of here by 12?” said Montague.

A seemingly peeved Clarke relented but immediately moved on to committee member Dr Angela Brown Burke who, too, continued with the issues raised by Montague before the meeting ended.

In 2018, Opposition lawmaker Fitz Jackson introduced a banking services bill that was rejected by government members including Montague.