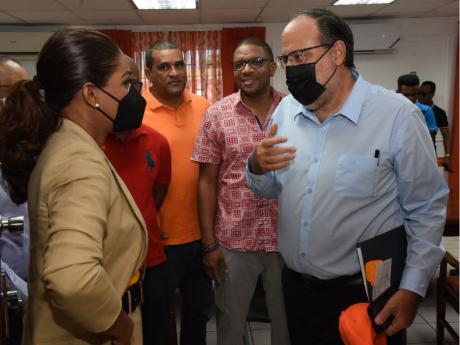 Mark Golding (right), President of the People’s National Party (PNP), in conversation with Member of Parliament, St Ann South Eastern Lisa Hanna shortly after he was nominated for another term. Golding was nominated at the party’s St Andrew headquarters on July 5, 2022- Ian Allen photo.

Mark Golding was today nominated for the post of President of the People's National Party (PNP) at the party's headquarters on Old Hope Road in St Andrew.

At the same time, attorney-at-law Senator Donna Scott Mottley has thrown her hat into the ring for one of the vice president positions in the party.

The other nominees are Mikael Phillips, Norman Scott, the mayor of Spanish Town, and Ian Hayles.

Phillips is seeking to return to the post of vice president after resigning from that position last year to make way for candidates that had the backing of Golding.

At this morning's nomination exercise, Golding and vice-presidential hopefuls were at pains to signal that the disunity that had dogged the party for some time now had waned and that the supporters were lining up behind one leader.

Following the nomination earlier today, Golding said that he was happy with the progress that the party was making.

He thanked those who had worked diligently to “bring the party together and to become a formidable team as we move forward and take back Jamaica from where it is now which is in a very difficult place of despair, hopelessness and indeed sufferation for far too many”.

Only Golding has so far signalled his intent to run for the presidency.

The nomination exercise ends on Friday.