PNP urged to be cautious as Comrades embrace turncoat Meadows 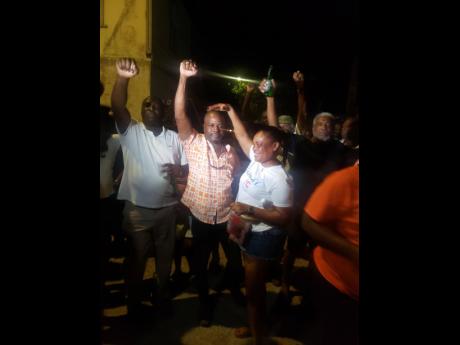 Photo by Leon Jackson
Dennis Meadows (centre) being welcomed into the People’s National Party at the Falmouth Divisional Conference at Falmouth All Age School in Falmouth, Trelawny, on Sunday night.

It was Meadows’ first public appearance at a PNP event since announcing in March that he was ending what he termed a “toxic relationship” with the governing JLP.

Meadows has maintained a constant presence in the constituency despite losing to the PNP’s Patrick Harris (2007), Patrick Atkinson (2011) and Victor Wright (2016) when he previously contested the seat for the JLP.

Tova Hamilton, who the JLP gave the nod to represent the party in the last election, successfully brought to an end the PNP’s 31-year reign in Trelawny Northern.

On Sunday, Meadows said that he was ready to work with the PNP with an open mind.

“I come with no special ambitions in terms of seat representations,” he said at the conference held at the Falmouth All-Age School. “My focus now is to work for the party to rid this country of this corrupt and vindictive Government.”

He added that the path forward involved teamwork.

“I intend to work with all the candidates in the upcoming local government elections. By the sort of reception I got when introduced, you know that I have some goodwill among the people. I intend to use it to benefit the party,” he stated. “Many of my drinking friends are PNP [supporters], so I have a start there.”

Two senior PNP members in the constituency urged caution despite the warm welcome.

Mark Campbell, a former regional chairman, questioned the choice of song played as Meadows made his entrance.

The 1999 Grace Thrillers hit There Was Ninety and Nine speaks of a sheep which had strayed from the flock and was eventually rescued by the Shepherd.

“Whatever the decision the party makes, Meadows will have to work to gain the confidence of the people,” said Campbell. “It is ironic that the song played in his welcome was used. He was never a part of the fold.”

“He is a three-time defeated JLP candidate in the constituency. His name is out there with some negative baggage. We have to think long and hard how he is used,” said Watson.