Youth mentor Thompson gives back at ‘Believe: Made for More’ book launch 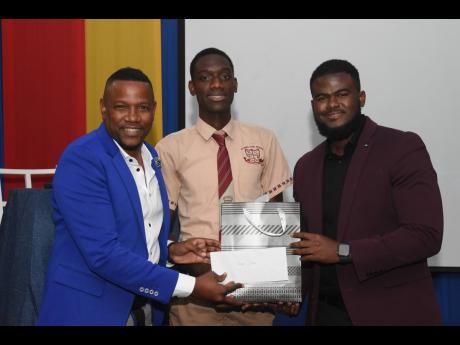 Ashley Anguin
Youth mentor and transformational speaker, Conroy Thompson (left), presents a scholarship to St James High School student Dane Dyer (centre), during the official launch of his new book at The University of the West Indies West Jamaica campus in Montego Bay, St James, on Sunday, July 3. Also pictured is Dr Camir Ricketts, founder of the Minds of Jamaica mentorship initiative, who is also making a presentation to Dyer.

FOR ST James-based youngsters Mackiel Blair and Dane Dyer, Sunday evening will be etched in their memories for a long time as they were both gifted with scholarships valued at a combined $100,000 to aid them in furthering their education, courtesy of youth mentor and transformational speaker Conroy D. Thompson.

The two young men received the scholarships during the official launch of Thompson’s new book, Believe: Made for More, held at The University of the West Indies (UWI) West Jamaica campus in Montego Bay, St James.

Dyer, 18, received a scholarship valued at $70,000, while 12-year-old Blair’s scholarship was valued at $30,000. Both boys were awarded as part of Thompson’s drive to assist promising students in financial need, in keeping with the mandate of his ‘Suit Up, Dress Up, Step Up’ youth outreach initiative.

For Dyer, a resident of Mocho district who currently attends the St James High School, his scholarship was a much-needed breath of fresh air to assist with his studies. He also admitted to establishing a kinship with Thompson, who himself had gone through personal challenges earlier in life.

“I was a bit thrilled to hear about the scholarship because, before my guidance counsellor called me about it, I was going through difficulties and I was crying about it. The announcement made me feel a little better,” Dyer confessed.

“When Mr Thompson and I just met, I felt a connection because, as we started talking, he said he had been going through similar situations. I realised that I was like him, because he is helping people, and, when I can help others, I try my best to help others,” Dyer added.

Blair, a student of the Mt Salem Primary and Infant School, who will soon matriculate to high school, told The Gleaner that his scholarship came just in time as he was in need of a digital device to continue doing his schoolwork.

“I am grateful and thankful to Mr Thompson for presenting me with this gift. I was happy and glad for it because I did not have any devices at home, as one of my devices was broken since I had had it for a long time,” Blair added.

In his keynote presentation prior to awarding the scholarships, Thompson stressed how much he has valued youth outreach over the years, including donating proceeds from the sale of his first book, Rejected, Redirected for Purpose, toward that cause.