‘She would have enjoyed it’ 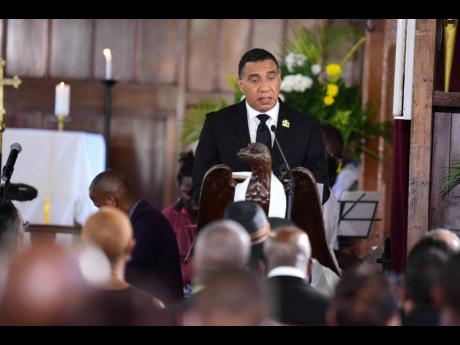 On the occasion of what would have been her 69th birthday on July 4, and a little over two years after her passing, much-loved politician Shahine Robinson was finally given an official funeral.

Robinson died May 29, 2020 at a time when the pandemic was spreading in Jamaica, and funeral gathering were banned to prevent the spread of the disease.

But time seemed not to have soothed the hearts of Jamaica Labour Party supporters from her former constituency of North East St Ann who turned out in their numbers, with many of them weeping at the loss of their dearly beloved former member of parliament (MP).

Robinson served as MP for North East St Ann from 2002 until her passing in 2020, leaving her with the distinction of never having lost a contest for a seat as MP.

In her eulogy, Rev Dr Canon Georgia Jervis, one of seven clergy members who participated in the ceremony, described Robinson as being “loved much” and likened her to the biblical figure Dorcas, written about in Acts 9:36-42.

“It has been two years, two differently difficult years in which family members, friends, colleagues, constituents, an entire nation have been waiting to bid farewell to one who loved much and was loved in return,” she noted.

“As I reflected on the legacy she has bequeathed us, I came to the conclusion, not for the first time but in a renewed way, that contrary to what seems the popular opinion when leadership that is authentic, and this not applicable only to particular positions or portfolio responsibilities, when leadership is genuine, it finds its reason for being and is always exercised in humble service rather than ubiquitous popularity.”

THE STORY OF DORCAS

She continued: “So as I reflected, a story found in New Testament scriptures came to mind and heart, it is the story of a woman, Dorcas by name, of whom the message translation of Acts chapter 9 verses 36-43 tells us – “She was a woman who was well known for doing good and helping out”.

One of Robinson’s trusted councillors, Genevor Gordon-Bailey, of the Lime Hall division, in painting a picture of the ceremony which was attended by hundreds of supporters from all four divisions in the constituency, said Robinson would have enjoyed the service.

She said she was happy that Robinson was finally getting an official farewell, even though the event revived the pain of losing her.

“It opened up the wounds of mourning her but after two years I’m glad that the decision was made and she did get an official funeral because this was well deserving for her, the servant she was and what she did for the people of North East.

“And the people of North East were in mourning, they cried; you still have persons weeping for her just the same,” she added.

Gordon-Bailey said Robinson was one of a kind.

“I don’t think in the lifetime of any of us we will live to see another political representative that genuinely cares for people like her. Anybody that knew her personally would tell you she truly, truly cared for the people that she served,” said Gordon-Bailey.