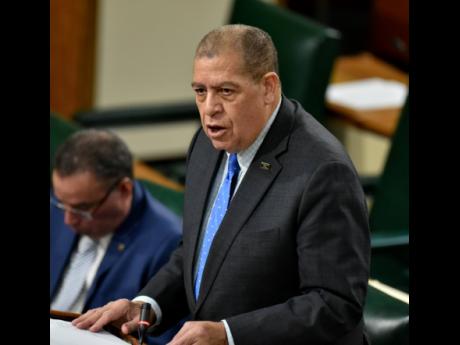 Lawbreakers are to be ticketed electronically for offences committed when surveillance is implemented under the 2018 Road Traffic Act, portfolio Minister Audley Shaw has said.

The announcement was made in the Lower House on Tuesday, where Shaw, the minister of transport and works, outlined a raft of new provisions under the Road Traffic Regulations, 2022, which were subsequently approved.

Shaw said the new electronic monitoring and surveillance regulations will allow for remote detection of offences, and ticketing, using cameras and other electronic devices.

He said where traffic offences are detected remotely, the owner of the vehicle will receive the ticket.

Electronic detection devices will be approved by the Island Traffic Authority (ITA), he noted, and will be installed on or near a road.

The devices are expected to capture traffic offenders who speed, disobey traffic signals, and operate vehicles not licensed, insured, or certified as fit.

Shaw said as the programme is rolled out, the regulations will be adjusted to cover any additional devices or provisions that are necessary.

This is one of several key regulations included in the long-delayed Road Traffic Regulations, 2022, covered under the Road Traffic Act, 2018, which saw some 299 new regulations that identify scores of new offences.

The latest update is to facilitate the proper implementation of regulations, although the minister has indicated that only a fraction of the 13-part law will be brought into operation.

Phased implementation will be finalised in conjunction with key stakeholders, he said.

Other new regulations include the requirement for driving instructors who are paid to become certified, as well as the licensing of driving schools. This is to be monitored by the ITA, which will keep a registry.

Shaw said where the instructor is a family member, certification will not be needed.

Provisions have also been included for demerit points on a driver’s licence to expire after 15 months if fewer than 10 points are earned during the period.

The minister said after a period of suspension, the points that led to the suspension will be expunged.

The ITA is also empowered to require specific training or retesting for persons whose driver’s licences have been suspended.

Lawmakers on both sides of the House welcomed the regulations but cautioned that enforcement and public education were equally important.

“We would like to see the reduction in fatalities but, again, without proper enforcement, the regulations and the Road Traffic Act itself basically come to zero,” Opposition Spokesman on Transport and Works Mikael Phillips insisted.

At the same time, he expressed disappointment that a public education campaign was not formulated from 2018 when the act was passed.

There have been 239 crash fatalities in 2022, a three per cent decline year-on-year.