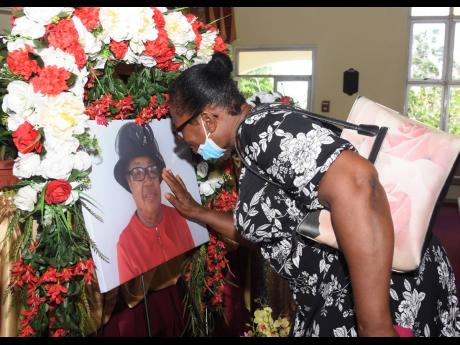 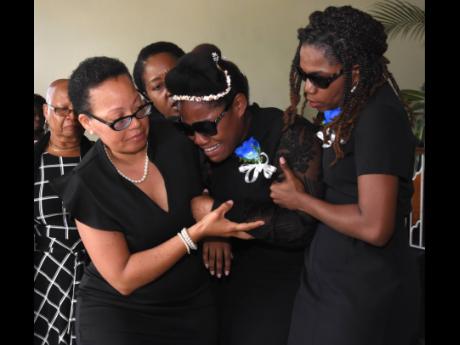 Ashley Anguin/Photographer
Shannon Walters (centre), daughter of Beryl Walters, is being comforted by her cousin Shelly-Ann Whittingham (left) and sister Dr Julian Walters as she breaks down during the service celebrating Beryl Walters’ life at the Mount Salem Seventh-day Adventist Church in Montego Bay on Wednesday.
1
2

TEARS AND tributes flowed in equal measure at the Mount Salem Seventh-day Adventist Church in St James, where relatives and friends of 68-year-old Beryl Walters gathered to reflect on her life in a thanksgiving service on Wednesday.

Walters, who was washed away on April 19 during flood rains in the Westgate section of Montego Bay, has been feared dead. Her body has not been recovered.

Her 12-year-old granddaughter, Jennel Walters, died in the tragedy and was laid to rest earlier this week.

During Wednesday’s service, tributes were delivered in speech and song from various quarters, including the Farm Heights Seventh-day Adventist Church, where she had served on the choir.

Representatives of the St James High School and the University of Technology Western Jamaica Campus, where her relatives are employed, also paid their respects.

Walters’ youngest daughter, Shannon Walters, who was in the ill-fated car along with her parents and niece when tragedy struck, described her mother as a disciplinarian who loved her family dearly despite her health challenges.

“Growing up, Mom was very strict. She was very protective of all of us, and she had big dreams and expectations,” said Shannon. “She was very strong-willed and she was a good judge of character. Her physical eyes were impaired, so she wore glasses, but she was the eyes of our family.”

Halcyon Norman, who shared a decades-long friendship with Walters, remembered her as a generous woman.

“We have been friends for 45 years, and in all that time we never had an argument to say that we are not speaking to each other. I have never gone to Beryl’s house and never got a drink of water because she would say, ‘Look in the fridge and take what you want’,” Norman told mourners.

‘Miss Beryl’, as she was affectionately known, was married to Berris Walters, who she exchanged vows with at the Holy Trinity Church at Westgate in 1996 and with whom she had five children.

The couple was travelling together in their family car on the fateful day. Berris and their daughter Shannon were quickly rescued by residents as the vehicle was being swept away.

During his keynote sermon, Pastor Vencot Dyer noted that Walters was a godly woman who modelled good family values.

“I trust that those of you who would have known Sister Walters would know that she was a woman of God. The beautiful picture of family that was painted reflected the unity that God wants to see in a family,” said Dyer. “When tragic moments like this happen, words cannot bring comfort, but there is One who can bring peace in the midst of the storm.”