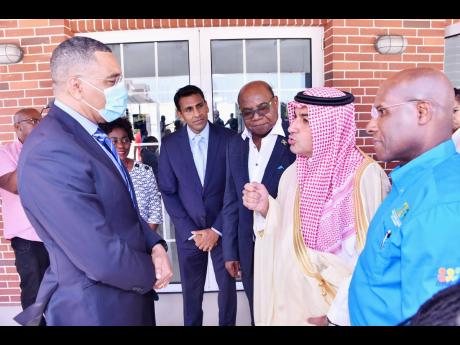 Saudi Arabia has expressed a keen interest to explore investment opportunities in Jamaica.

Deputy Minister for Investors Outreach in the Kingdom of Saudi Arabia (KSA), Badr Al Badr, said both private and public companies in the Middle Eastern country were keen to explore investment prospects in Jamaica and the wider Caribbean region, which, he said, has become a priority zone for his country.

Prime Minister Andrew Holness received this assurance from Badr during a business luncheon hosted for a 65-member delegation visiting Jamaica from the Middle Eastern state on July 8.

The luncheon was held at the Port Royal Cruise Pier in east Kingston.

Badr, in his remarks, said the trip was an “excellent opportunity” for the Government to see first-hand “what we have to offer”.

“We believe in the opportunities [in] Jamaica and … we very much want to develop the investments dialogue which we recently begun with you,” he added.

The KSA deputy minister emphasised that investments are among the engines of growth in any economy through asset creation, “which leads to enhanced production, employment and overall economic progress”.

“In essence, investments link the present with the future. That is why we wish to understand, in more details, the investment opportunities here in Jamaica. From ready-to-go commercial opportunities and low-hanging fruit projects, to long-term infrastructure [developments]. I … share our enthusiasm, passion and commitment to build stronger and deeper investment, trade and business links between Jamaica and Saudi Arabia,” he added.

Noting that such activities “will help … us to further diversify and grow our economies and our private sectors and companies,” Badr said he was “especially pleased” to have led the largest such investor group to visit the Caribbean.

He pointed out that the team included the heads of 40 leading Saudi companies and investment firms, along with senior representatives from ministries and agencies.

Among them were the Saudi Fund for Development, the Public Investment Fund, and the Export-Import Bank.

“We have leading companies operating successfully internationally in many areas that can work with the Jamaican Government and [entities] to boost and diversify both economies in sectors like agriculture, traditional and renewable energy, mining, tourism, logistics, information technology, financial services, transportation, healthcare, construction, [and] engineering,” he further stated.

Badr said the Saudi companies bring with them a “strong, proven set of capabilities assets,” adding that “they can help you [to] grow bigger, faster, and more profitably”.

“We have an excellent opportunity to work together to build and develop the protective assets and infrastructure to help people, and to also drive the future of growth of both our countries. We are looking forward so much to our discussions with you … and to also start developing … a road map that can really be linked with … ready-to-go investments [as] we work together [on] the funding … in a most institutionally structured way,” the deputy minister added.

Badr said Friday’s engagement was “especially important for us,” pointing out that the Caribbean has become a “priority zone” for investments and business partnerships for Saudi Arabia.

He maintained that Jamaica, as the Caribbean’s third-largest economy, is a “key partner, a key player and a key leader” in this regard.

Holness, in his remarks, noted that Jamaica has many opportunities “[for which] we need partners to invest with us”.

He listed areas for investment in agriculture, special economic zones, tourism, human capital/resource development, and infrastructure development, among others.

The prime minister said he was “very impressed” with the diversity of the group’s representation, noting “it tells me that this [was a] well thought-out, well-planned delegation that is serious about doing business”.

“I would want to see this trip being remembered as the point in time when we really and truly realised serious investments from the Middle East, particularly Saudi Arabia, in this region,” he added.

Tourism Minister Edmund Bartlett said the delegation’s visit represented the outcome of two and half years of stakeholder engagements between Jamaica and Saudi Arabia.

“It began when we went to open the regional office for the UNWTO (United Nations World Tourism Organization) in Riyadh (Saudi Arabia’s capital and largest city). At that meeting, we used the opportunity to have discussions with an array of investment options within the Kingdom,” he informed.

Bartlett said he and Industry, Investment and Commerce Minister, Senator Aubyn Hill, who accompanied him, met and interacted with the “finest minds” and the “biggest and most impressive companies” there, which resulted in, among other things, the delegation’s visit to the region.

“Jamaica feels proud to have been [instrumental in facilitating] the largest investment delegation that has ever [come to] the Caribbean,” he added.

Prior to visiting Jamaica, the delegation participated in the inaugural Saudi-Caribbean Investment Forum in Punta Cana, Dominican Republic, from July 6 to 8.