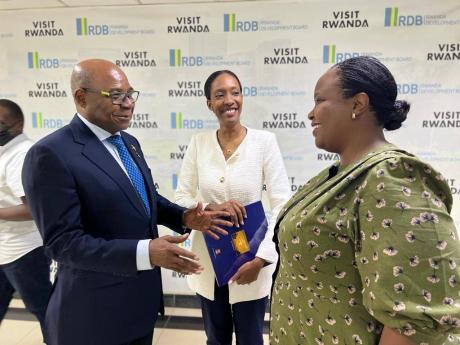 Minister of Tourism Edmund Bartlett has revealed that a new memorandum of understanding (MOU) has been reached between the governments of Rwanda and Jamaica.

The agreement, signed in April during the state visit of Rwandan President Paul Kagame, is one of two MOUs that aim to strengthen bilateral relations between the two countries.

“That MOU, which was signed when President Kagame was in Jamaica, covers a number of areas of collaborations. One had to do with marketing support which Jamaica would provide,” Bartlett told The Sunday Gleaner last week.

“On the basis of human capital development, we looked at the whole area of training: training for tour guides, and training for destination assurance as a critical part of the safety, security and seamlessness that must characterise a destination,” added Bartlett.

The Jamaica Tourist Board is tasked with working closely with the Rwandan Development Board (RDB) to implement the MOU. Bartlett elaborated that the Jamaican Centre of Tourism Innovation is also collaborating with the Rwanda Hospitality School and the RDB to facilitate training.

Additionally, he shared that air connectivity was a major discussion point between Jamaica and the east African country.

“RwandAir is now being positioned to begin operations through some gateways that they serve as a start in getting traffic into Jamaica, then later to have direct flights to Jamaica and for Jamaica to become the hub for the eastern African airlines,” he explained.

Discussions about the requirements to fly directly into Jamaican air space have begun with RwandAir along with Ethiopian Airlines and Kenyan Airways.

Increasing resilience is also a key priority area of the MOU.

“The Africa Leaders University is coordinating with the Jamaica Centre for Tourism Innovation and, of course, the Global Tourism Resilience and Crisis Management Centre (GTRCMC) at The University of the West Indies to build capacity to respond to disruptions,” Bartlett said.

The GTRCMC is a research, training and policy formulation institution, whose responsibility is to provide assistance to tourism destinations around the world in areas such as preparedness, management and recovery from disruptions.

The minister explained that students at the nine GTRCMC institutions established so far will work on a project, under the leadership of a professor, that addresses the issue of tourism sustainability, including crisis management or devising a recovery programme. George Brown College in Toronto, Canada, and the Middle Eastern University in Jordan are two such institutions that are participating in this programme.

Details for this arrangement along with the partnership between the eastern African airlines are slated to be finalised by September.

Students participating in the research programme will be involved in the inaugural Caribbean African Tourism Forum, which will be held in Jamaica in February 2023. This will coincide with the launch of Global Tourism Resilience Day in the same month.