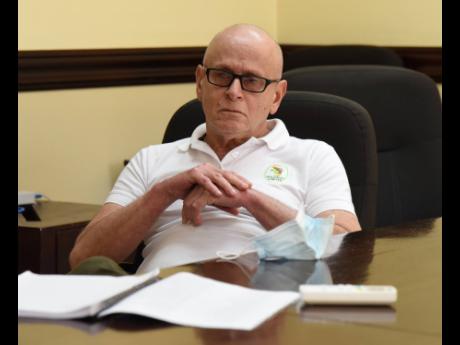 Joseph Shoucair, chairman of the Transport Authority of Jamaica.

More than three weeks after chairman of the Transport Authority of Jamaica (TAJ), Joseph Shoucair, requested video footage captured at a Christmas party held in breach of COVID-19 regulations by the state entity last year, he has failed to respond to questions about the event.

Chief among the allegations is that not only was a senior manager of the entity in attendance., but he was reportedly shining the spotlight on two daredevil patrons who had mounted the side of the Transport Authority’s administrative building, hanging from a ladder as they gyrated to the amusement of other attendees.

On June 21 this year, Shoucair spoke with The Gleaner about the resignation of the acting managing director, but claimed it wasn’t an appropriate time to address unanswered questions about the illegal party.

News of Willard Hylton’s resignation had sparked unrest among some staffers at the TAJ’s Maxfield Avenue offices in St Andrew.

“When I’m faced with the resignation of my managing director not taken well by the majority of the staff of the TAJ, who are walking off their jobs in support of Mr Hylton, this is not the appropriate time to discuss that matter,” he said.

The chairman eventually said Hylton’s resignation was not linked to the controversial staff party.

Existence of the footage

When pressed for a response last month, the chairman said the management had denied there was a company-sponsored event, despite the existence of the footage.

“I am unaware of that. I have enquired into that matter. The information I have does not support an organised, company-sponsored event. That is the info I received from the management of the authority,” said Shoucair.

When told that Gleaner sources had indicated that a member of the management team was shining the light on the couple, the chairman was dismissive.

“I don’t believe that dancing was or is illegal,” he said.

After indicating that he had not seen the videos, The Gleaner sent the footage to Shoucair.

In April this year, The Sunday Gleaner reported that despite orders under the Disaster Risk Management Act (DRMA) prohibiting the hosting of entertainment events, last December, as the island was on the cusp of a fourth COVID-19 wave, the government agency hosted an illegal party for staff.

Three months later, the authority has refused to respond to emails or calls about the event. Multiple attempts by The Sunday Gleaner to get a response from Transport Minister Audley Shaw, and Dr Alwin Hayles, permanent secretary in the Ministry of Transport, have also failed.

Shortly after the revelation of the illegal party, Mikael Phillips, opposition spokesman on transport, called on Shaw to launch an investigation into the breach of the COVID-19 orders then in place.

On Friday, Phillips said he was confident the transport ministry has not initiated a probe and chided Shaw and Shoucair for not dealing with the issue.

“Whatever the reason, it is unacceptable that there has been no response from the chairman or the minister,” Phillips said.