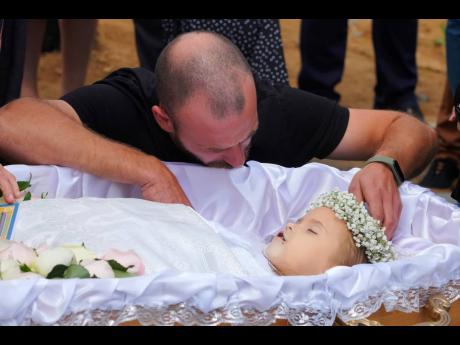 AP
Artem Dmitriev gives his last salute to his daughter Liza, four-year-old girl killed by Russian attack, in Vinnytsia, Ukraine, on Sunday. Liza was among 23 people killed in Thursday’s missile strike in Vinnytsia.

Fires scorch Spain and France, where flames reach the beach

Firefighters battled wildfires raging out of control in Spain and France, including one whose flames reached two popular Atlantic beaches on Sunday, as Europe wilted under an unusually extreme heat wave.

So far, there have been no fire-related deaths in France or Spain, but authorities in Madrid have blamed soaring temperatures for hundreds of deaths. And two huge blazes, which have consumed pine forests for six days in southwestern France, have forced the evacuation of some 16,200 people.

In dramatic images posted online, a wall of black smoke could be seen rolling towards the Atlantic on a stretch of Bordeaux’s coast that is prized by surfers from around the world. Flames raced across trees abutting a broad sandy beach, as planes flew low to suck up water from the ocean. Elsewhere, smoke blanketed the skyline above a mass of singed trees, in images shared by French firefighters.

In Spain, firefighters supported by military brigades tried to stamp out more than 30 fires consuming forests spread across the country. Spain’s National Defence Department said that “the majority” of its firefighting aircraft have been deployed to reach the blazes, many of which are in rugged, hilly terrain that is difficult for ground crews to access.

Fire season has hit parts of Europe earlier than usual this year after a dry, hot spring that the European Union has attributed to climate change. Some countries are also experiencing extended droughts, while many are sweltering in heat waves.

Beautiful and serene in a crown of white flowers, four-year-old Liza Dmytrieva, who was killed by a Russian missile strike, was buried Sunday in central Ukraine as an Orthodox priest burst into tears and told weeping relatives, “Evil cannot win.”

Liza, who had Down syndrome, was en route to see a speech therapist with her mother when Russian missiles struck the city of Vinnytsia on Thursday, far from the front lines. At least 24 people were killed, including Liza and two boys ages seven and eight, and more than 200 were wounded, including Liza’s mother.

“Look, my flower! Look how many people came to you,” Liza’s grandmother Larysa Dmytryshyna said, caressing Liza as she lay in an open coffin with flowers and teddy bears in Vinnytsia’s 18th-century Transfiguration Cathedral.