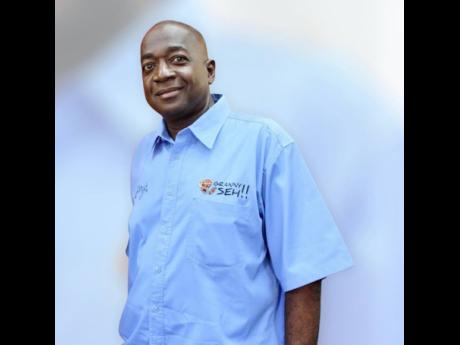 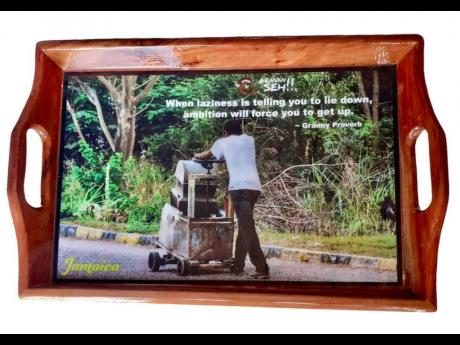 Contributed
A photo of a serving tray crafted by Garry’s Concept’s CEO Garry Parrish. The tray is inscribed with an original proverb created by the CEO. 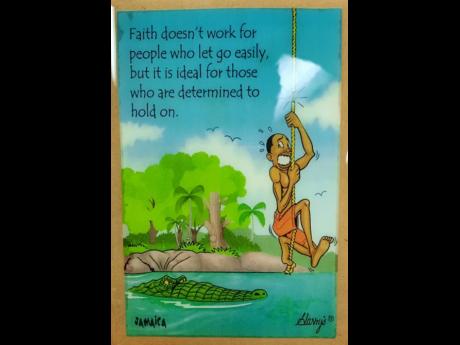 Contributed
A copy of the first quote written by Garry Parrish, imprinted on a plaque.
1
2
3

Many persons look for inspiration in the words or quotes of others, but former restaurateur Garry Parrish found it in his own words.

‘Faith doesn’t work for people who let go easily, but it is ideal for those who are determined to hold on’, was the first quote written on the notice board in his restaurant.

The quote, originally written by Parrish, served as a glimmer of hope after his cable business failed and he lost $10 million in an instant.

Parrish would fill the notice board in his new restaurant business daily with words of inspiration from his personal experiences.

He did not give the quotes much attention, because they came to him naturally, but his customers’ lives, many of whom frequented the establishment in search of inspiration, were always evolving.

After arriving at work one morning, Parrish was informed that there was someone there who wanted to speak with him.

He approached a woman who was drinking a cup of coffee that she purchased from the restaurant, and as he sat across the table from her, he introduced himself.

“I am leaving for the United States in the next couple of days. I always come to your restaurant, and I see the quotes on the notice board. I inquired about who wrote these thoughts, and I was pointed in your direction,” she told him.

Parrish said that her interest grew even further after she realised that the thoughts were originally written by him.

“She wanted to buy the book that I wrote my thoughts from as a gift for the person with whom she stayed during her visit. After she found out that these were my thoughts, she told me that I had a unique gift,” he shared.

A few days later, Parrish was approached by a man who said: “I work on a truck that delivers to a supermarket and I always come here to buy a drink. I could buy the drink in the supermarket, which is cheaper, but I come here because of the thoughts … dem nuh normal.”

On another occasion, he was told that he needed to publish a book.

Having had several conversations with persons, young and old, Parrish began to acknowledge his true calling. He reached out to the Jamaica Business Development Corporation (JBDC) for assistance with turning his passion into profit.

“I went to the JBDC and the first person I met was Terry-Ann Clahar, who became my business development officer (BDO). Terry opened the book and read about two pages. Closing it, she asked, ‘What do you plan to do with these?’” Parrish said.

Without thinking he responded, “I do not know.”

He was subsequently questioned by the BDO if he intended to place the quotes on products to sell them.

The assistance provided by Clahar pushed Parrish on his new journey to becoming the chief executive officer of Garry’s Concept, which offers wooden souvenir items inscribed with original words from his creations.

As part of his relationship with the JBDC, Parrish was invited to speak at a Global Entrepreneurship Week event in 2014. This served as the catalyst for numerous speaking engagements that followed.

Even though Parrish’s transition from restaurateur to owner of Garry’s Concept seemed effortless, there were many challenges that he encountered along the way.

He recalled being invited to an event, where someone broke into his car and stole his laptop, the book that he was supposed to publish, his backup flash drive and his camera, which contained more than 1,000 photographs which he used for his business.

“I called Ms Clahar and told her that I am finished. She offered me words of comfort, but there was nothing she could have said for me to change my mind,” Parrish said.

Despite giving up hope, the BDO continued her efforts to encourage him. One year, she invited him to attend the JBDC’s Entrepreneur of the Year Competition which he decided to attend at the very last minute.

“I left out late, and while I was in Half-Way Tree, I got a call saying that I was placed second in the competition. When I stepped into the ballroom at The Jamaica Pegasus hotel, someone attending the event shook my hand and said, ‘We love your work,’” Parrish said.

It was at that moment that he regained his confidence. His business flourished, and so when the COVID-19 pandemic came, the advice of his BDO, which was to “think purpose”, kept him going.

While the CEO had to shelve some of his products, such as his refrigerator magnets, he was able to pivot and produce items that served everyday purposes.

“I had to go back to the drawing board and look for what people wanted. This led to me concentrating on items such as serving trays, key holders, and desktop solutions – all of which serve a purpose,” Parrish said.

The products are available for sale at several outlets, as well as on the JBDC’s Things Jamaican Online Store.

Since the establishment of Garry’s Concept eight years ago, the entrepreneur has grown to incorporate ‘Granny Seh’, another key aspect of his business where he shares his quotes using the voice of an elderly woman, after which he gives the translation.

Sharing one of his infamous ‘Granny Seh’ quotes, he said, “Fowl an’ jancrow have feather, but only one fit fi guh pon plate”. When translated, it means that ‘there are people around you that you can work with, but if you are going out, you can’t bring them with you,’” he explained.

Looking back at where he started and the strides that he has made, he thanked the JBDC for “assisting me with realising that profit can be made from my passion”.