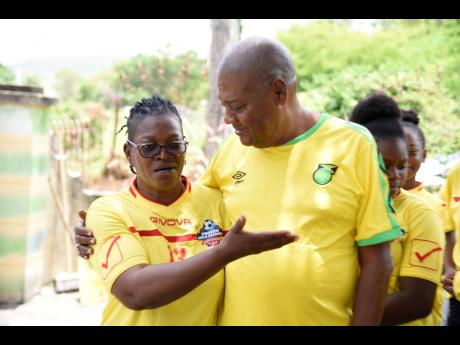 Nicholas Nunes/Photographer
President of the Jamaica Football Federation (JFF) Michael Ricketts comforts Roxene Campbell Carr, the grieving mother of Jedine Carr, during a visit to the family by the JFF. 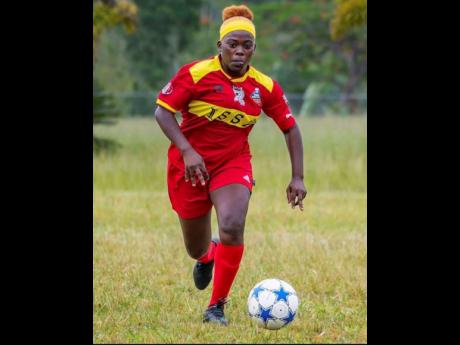 Jamaica Football Federation (JFF) President Michael Ricketts; Vice-President Raymond Anderson, directors, and other JFF staff members pledged support during a visit to the grieving family of 18-year-old Jedine Carr, a female football player who was killed on July 8 while travelling to practice in a taxi.

Two Thursdays ago, as large pots simmered on coal stoves, community members, friends, and Carr’s team members from the Proven Girls Academy congregated to celebrate the life of the youngster at her family house in the Heartease community of St Thomas.

Ricketts said the JFF has been “deeply saddened” by the “tragic” incident and saw it important to visit the family and offer support.

“We are traumatised and saddened, and we just wonder when these incidents will stop,” he said.

Carr had recently been called to the under-17 national training squad. She also played under-15 football for St Thomas and was a member of the Yallahs High School team, which participated in the ISSA Schoolgirls Competition in 2020.

She also travelled to China in 2018 as part of a 15-member contingent, which took part in the Chinese Football Development Exchange Programme.

Ricketts stated that the JFF will provide assistance, where possible, once the family had finalised burial arrangements.

He also noted that the Marley Foundation and Sport Minister Olivia ‘Babsy’ Grange have committed their support.

Carr was travelling in a taxi when she became the victim of a violent attack committed by two unidentified men who posed as passengers.

She was sitting in the front, while the men were seated in the back of the vehicle.

The attack caused the driver to lose control of the car, which crash into another vehicle, smash into a utility post, and then came to a stop in a nearby ditch.

Loud explosions were reportedly heard as the men escaped the vehicle.

Due to the nature of the tragedy, the family is still going through emotional suffering.

Roxene Campbell Carr can no longer face the anguish of losing her ‘superstar’ child, whose hopes and life was snuffed out by the evil of man.

Campbell Carr, however, who was wearing her daughter’s well-known number 13 jersey, was unable to control her emotions as she spoke with journalists.

The mother, who was already ill, said that since her daughter’s passing, her days had changed drastically, and the condition of her sickness was getting worse as she grieved.

In a recollection of the events that unfolded at the hospital, Campbell Carr said she wailed uncontrollably once it was confirmed that her daughter had succumbed to her injuries.

“Me bawl, me bawl, me bawl ... . My promise, our promise, they took her away from us. They took away my baby,” Campbell Carr said, as she again broke down in tears.

She added that her daughter’s promise to her was to make her shine, and give her many opportunities to tour the world alongside her as she represented her country.

The mother continued that it was fortuitous that her daughter had not brought along with her, a one-year-old nephew which she would typically bring to her training, because otherwise, two precious lives would have been lost that day.

“That baby always at training ... if is even school Jedine fi go, Jedine will tek weh the baby and carry the baby go school,” she said of her daughter’s relationship with the toddler.

Campbell Carr added that the baby has since been low in spirit.

“Him zone out two time on me. Him just come and fold him hand and lie down in my lap, and all me a shake him and a call him ... nothing,” she said.

“Right now, no happiness nuh inna my DNA,” she said, mourning the special bond she shared with Jedine that has been irrevocably severed by the hands of death.

Campell Carr revealed that her daughter had received a single bullet wound and was stabbed seven times.