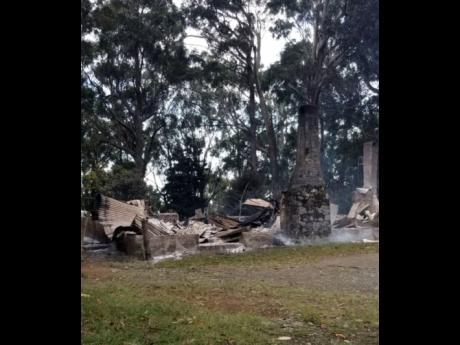 Contributed
What’s left of one of the buildings razed by fire at Whitfield Hall in St Thomas on Wednesday.

When John Allgrove, one of the owners of Whitfield Hall – an 18th-century site of rustic cottages in the Blue Mountains – received a call that the historic treasure was engulfed in flames in the wee hours of Wednesday morning, the 84-year-old was on the brink of falling apart.

For decades, Allgrove, who retired as former chief engineer of the Urban Development Corporation (UDC) in 1991, after serving in that capacity for 22 years, struggled with his wife, Sheila, to keep the 246-year-old historic house and hostel open and coffee farm running.

The Whitfield Hall Hostel was operated by others between 1946 and 1964, then by Allgrove’s father between 1965 and 1979. Allgrove and his wife have been in charge of the premises since 1979.

His main drive for keeping the property open is that his parents had always aspired to own the property. Fifty after his mother first leased it, Allgrove bought it in 1975.

“When my father retired in 1964, after Whitfield passed through about four hands, I leased the property for 10 years before purchasing it,” Allgrove said in a Gleaner interview Thursday.

“When I leased it, I spent about five years renovating the place, primarily myself doing most of the work, and then I started planting coffee and started cultivating coffee in the late 1960s up till now,” he added.

Whitfield Hall is situated six and a half miles below Blue Mountain Peak and it requires a four-wheel-drive vehicle to get there.

The original property was owned by William Whitfield, after whom the property is named, and was originally 301 acres. The property was subdivided in the 1940s, of which Allgrove now owns 40 acres.

Allwood further subdivided 25 acres for coffee, two acres for the hostel operation, and the other for environmental conservation.

Part of the property was used as a hostel for guests, which was 60 feet long and 40 feet wide. Allgrove had a 30-square-foot cottage, and a 20-foot-by-10-foot kitchen, which were razed on Wednesday.

Whitfield Hall was registered with the Jamaica Tourist Board from 1965-1995, and then with the Tourism Product Development Company from 1996 to the present.

Despite its historical value, Whitfield Hall was never certified as a heritage site.

Allgrove insists that safety measures were put in place, even though there was still an old-fashioned kerosene-operated fridge on the property.

He said all the lamps at Whitfield Hall run on kerosene, which were off. Two staff members lived on the property, but their emergency plan was doomed. The fire extinguishers were inside the houses that were burnt to the ground.

“The water pressure there is very low. It’s just our spring, and there’s no fire brigade within 30 miles, so the fire brigade can’t get up there anyhow.”

“Everything in the buildings were lost. All the furniture, all the beds, all the blankets, and the old Tilley lamps and gas stoves and fridges which ran on kerosene,” he added.

All guests who last stayed in the hostel checked out the day before.

This is not the first time that Whitfield Hall has experienced tragedy.

In 2016, a two-year-old boy on a camping trip with his parents died after being struck by a branch during a freak storm.