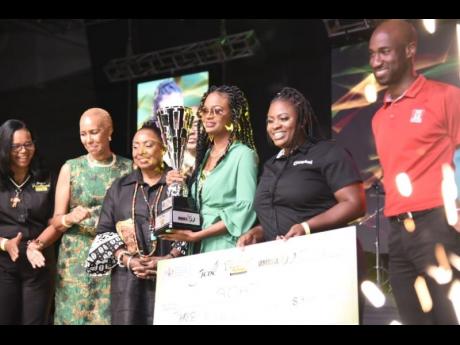 Thursday's event was a last-minute competition pulled together after public backlash over the initial decision to scrap the contest for this year because of poor quality entries. Nicholas Nunes photo

It was jubilation and pandemonium inside the National Indoor Sports Centre on Thursday night when Sacaj was announced winner of the Jamaica 60 Festival Song Competition.

The 29-year-old from Sandside, St Mary is the fifth female to win the competition in its 56-year history, making it back to back winnings for two women.

Her Nuh Weh Nice Like Yard, beat nine other entries to take top honours and a prize of $3 million, which she will share with producer Newell Morgan.

Sacaj, the lone woman in the competition, recorded her first single in 2019.

Second place went to Magic Flute who had strong support inside the venue in St Andrew.

Thursday's event was a last-minute competition pulled together after public backlash over the initial decision to scrap the contest for this year because of poor quality entries.

The public response was even more intense give that Jamaica is celebrating 60 years of political independence from Great Britain.

The competition is organised annually by the Jamaica Cultural Development Commission.