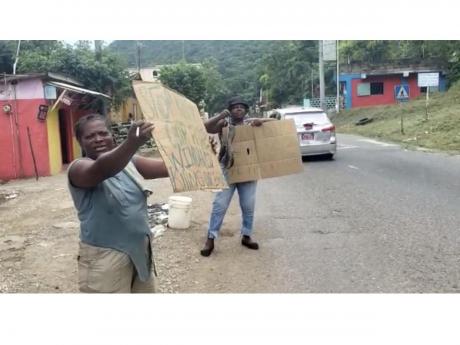 Protesting residents of Kent Village in St Catherine on July 30, 2022.

Upset residents of Kent Village in St Catherine today protested over yet another fish kill in the Rio Cobre.

They said they awoke this morning to hundreds of dead fish floating downstream and the smell of caustic soda coming from the river.

The residents say this is a blow to their livelihoods.

"I have a boyfriend with three kids [and] right now we are suffering. We have some men to supply with fish [but] nothing going out," Joan Barrett told The Gleaner.

Similar sentiments were shared by other residents.

The protesting residents say they are concerned about the impact of the fish kill and are demanding action from the authorities.

This morning, bauxite company UC Rusal reported that trade effluent at its Ewarton Works Plant in St Catherine has overflowed into waterways in the area.

The company said this happened as a result of heavy and continuous rainfall on Friday.

It said the spillage has affected waterways in the vicinity of Byndloss, Vanity Fair, Charlemont Foot Bridge, as well as the Rio Cobre.

“All efforts are being made to maximise the return of effluent to the plant to curtail the spill from the holding pond and to prevent the contamination of other areas,” a spokesperson said in a statement this morning.

“In addition, the company has also implemented neutralisation and dilution measures by flushing waterbodies with fresh water in strategic areas downstream in order to mitigate the impact of the overflow,” the spokesperson added.