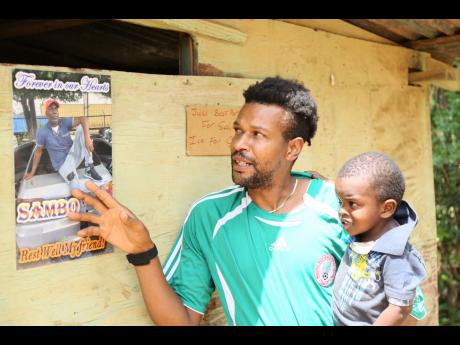 Nathaniel Stewart
48-year-old Carlton Simpson was the casualty of a three-vehicle collision on the Content main road on May 17. A jovial and respected community member, his picture hangs on corner shops as his friends and relatives plan his final rites. Here, relative Joseph Simpson is still mourning. 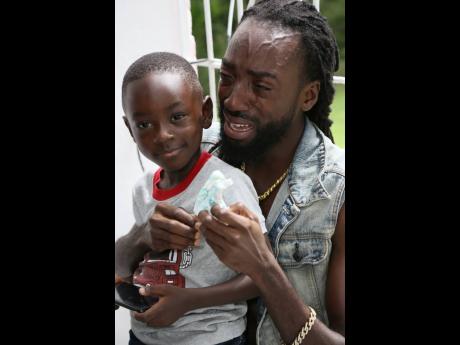 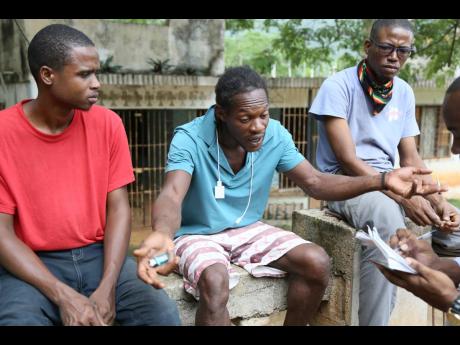 Nathaniel Stewart
Residents of Spring Grove community in Porus, Manchester are still in disbelief as they prepare to bury two of their own killed in motor vehicle accidents exactly two months apart. 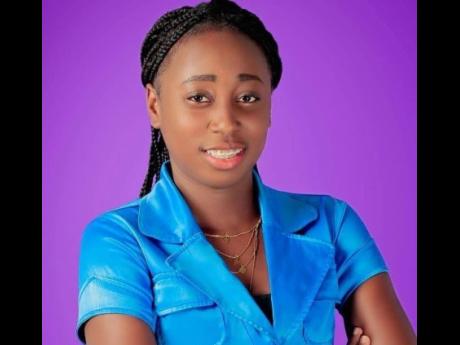 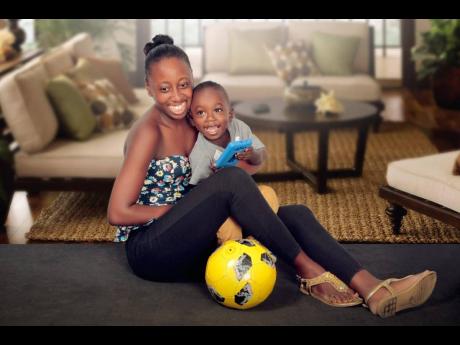 ‘Set-ups’, grave-diggings, vigils, and tears. The story of a rustic Spring Grove community in Porus, Manchester, stumped in grief and preparing to bury two of their own killed in motor vehicle accidents exactly two months apart.

The first, 48-year-old Carlton Simpson, was the casualty of a three-vehicle collision on the Content main road on May 17. A jovial and respected community member, his picture hangs on corner shops as his friends and relatives plan his final rites.

The community would lose a second member on Sunday, July 17, at the Drag Rivals racing event in Vernamfield, Clarendon, as 25-year-old Ashley Findley-Forbes fell victim to an out-of-control car.

Concerns were raised about whether the meet should have been held after miscreants reportedly smeared the track with several gallons of oil a day before the event, reportedly in an act of sabotage. The organisers then engaged in a day-long mission in an attempt to restore the surface to suitable conditions.

Video footage of the crash shows the car careening off the former US World War II airstrip and slamming into a throng of spectators. Findley-Forbes was among four persons injured. She died while undergoing surgery at May Pen Hospital hours later.

“This one (Findley-Forbes’ passing) was really a second shock!” Agrene Dale heaved as she recalled the incident last Thursday.

“She was a church girl, loved her yard; from work to home, that’s it,” Dale said of her childhood friend.

“She was so soft and humble and jovial,” she continued. “What makes it harder is that you are watching the TV and the phones and some of us didn’t even know it was her at first.”

For Findley-Forbes’ mother, Lisa, the pain is unspeakable.

After agreeing to an interview with The Sunday Gleaner, the mother opted out at the last minute on Thursday, the grief still too heavy to relate.

On her social media pages, however, she bemoaned draining mornings without her daughter, and having to identify her body at a funeral home. She plastered photos of her and Findley-Forbes on the Internet, along with images of candles dotting pathways in the community during the vigil. Some were placed in the shape of a heart around a photo of Findley-Forbes.

Not far away from her home, the father of Findley-Forbes’ six-year-old child, Patrick Pinnock, cried openly, recounting the tragedy. He was told that the boy was taken to urinate moments before the accident.

“How is it that they don’t have proper barriers at the show? How is it?” he asked. “And both of us were breadwinners for our son, 50-50. Now she is gone, how is it going to go? Up to this point, nobody has come and spoken to us or offered us anything.”

Findley-Forbes, who was recently married, attended the drag-racing meet with her son and husband a day before her son’s birthday. He still asks for his mother.

“It is really sad in the community,” offered Joseph Simpson, still mourning his relative Carlton Simpson. In a roadside squabble in the community about culpability at Vernamfield, he defended the safety standards at the location. Others didn’t.

“But, you see, in driving, anything can happen when you are in a vehicle,” Joseph said, recounting several deathly encounters during his 15 years as a taxi driver.

Dale was unconvinced, adamant that more can be done to safeguard spectators at such events.

It is still not clear what actions can be brought against either the promoters of the event or the driver of the ill-fated motor vehicle.

Assistant Commissioner of Police Gary McKenzie said it may take a few more months for the completion of an investigation into the Vernamfield crash.

The probe is primarily the remit of the Clarendon police in collaboration with accident reconstruction officers, he said. Last week, statements from other persons injured were still outstanding.

McKenzie responded to allegations of sabotage at the track.

“Aspects of that may come out as well as recording statements from persons who may know that is the case. We are doing a kind of technical analysis as to how and why the crash may have occurred,” he said.

“This is a private area, and where we have any event that attracts the public that has to come under scrutiny from public agents to include the police,” he said. “So we have to look at the permissions that were given to utilise the area, the event itself, and the kinds of preparations that were made for safety.”

Negligence may be one possible charge, McKenzie agreed.

Police have already interviewed 41-year-old Rory Smith, the driver of the Toyota Supra involved in the accident, and according to his attorney, Christopher Townsend, the case would be one for the civil courts.

“You have to remember this is not a manslaughter situation that occurred on the road. This is an incident on a speed track at an event where there are patrons. So the situation is very different and the laws in relation to it are different,” the attorney told The Sunday Gleaner.

“One of the best examples is that there is no speed limit because it is a speedway, and that is one of the things that you would use to determine negligence, which is speed. You wouldn’t have that component there.”

Townsend added, “It is also a fact that the track was doused with oil. But the track was certified for racing. So I suppose a full investigation will reveal more. But it seems to be more of a civil case rather than any criminal liability.”

The incident has nonetheless shrouded the local motorsport industry. It has no doubt brought a pall of gloom for Drag Rivals organiser Kenneth Timoll, who has been pivotal on the motorsport stage for many years.

Timoll has staged 11 drag racing events since 2018. All were kept at Jamwest Motorsport and Adventure Park in Westmoreland before the event was moved to a more central Vernamfield this year.

He said the budget for such an event can range from $5 million to $15 million, depending on the number of safety features and amenities promoters can afford. Staging an event at a location like Vernamfield, for example, where the venue is open, away from any buildings, electricity and potable water, impacts the budget.

Except for expressing condolence to the families affected, Timoll declined to speak on the crash, but said it shifted the focus from the positive aspects of local motorsport to the negative.

“Nobody is paying attention to the bright side of us bringing back motorsport in a sanctioned event after two and a half years or back to Vernamfield after five years. They don’t talk about what we have done for the community of Gimme-Me-Bit, the things we put in place to help them to come back out of the loss of that income,” he said.

“It really paints a bad image of what we are trying to do, because there has been a lot of illegal activities (drag racing) islandwide, and a lot of incidents in other places. It is unfortunate that now that we are trying to get it back to a standard and operate safely, ... nobody wants to highlight that.”

Timoll said motorsport has been a staple of Jamaican culture and that it is now more than ever that Jamaicans and corporate entities need to come on board.

In the meantime, motorsport vlogger Nick Lue of Skvnlifestyle, while offering sympathy to the bereaved relatives and friends, also called on the authorities and corporate Jamaica to bolster support for motorsport. It is one of the ways of improving safety, he said.