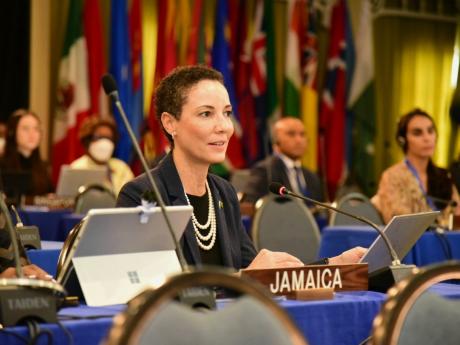 Minister of Foreign Affairs and Foreign Trade, Kamina Johnson Smith, addressing the International Seabed Authority Special Commemorative Session for the 40th anniversary of the adoption of the United Nations Convention on the Law of the Sea, held at The Knutsford Court Hotel in St Andrew on August 1, 2022. – Contributed photo.

Jamaica will not support deep sea mining in the International Seabed Area without a suitable regulatory framework being in place, says Minister of Foreign Affairs and Foreign Trade, Kamina Johnson Smith.

“While Jamaica continues to attach significant importance to the full and effective implementation of [the] United Nations Convention on the Law of the Sea (“the Montego Bay Convention”), I wish to state unequivocally, that the Government of Jamaica is not prepared to support deep-seabed mining before an appropriate, robust regulatory framework is put in place, in keeping with the guiding thrust of our deliberations,” she said.

Johnson Smith was addressing the International Seabed Authority (ISA) Special Commemorative Session for the 40th anniversary of the adoption of the Montego Bay Convention, held at The Knutsford Court Hotel in St Andrew, on Monday

She stressed that Jamaica remains committed to developing a sound, stringent, balanced, and comprehensive regulatory framework in relation to the future development of deep-sea mining in the International Seabed Area.

“We are guided by the tenets of the precautionary approach, best available science, and transparency and equity, in accessing the Area and its resources, to safeguard the 'common heritage of humankind',” she said.

Johnson Smith pointed out that the adoption of the Montego Bay Convention is significant, as it serves as a best practice for the governance of global commons, noting that it is one of the first, and few instances, in which the interests of humanity have been elevated above State sovereignty and national interests and codified in international law.

“Jamaica is, therefore, extremely proud of its contribution to the elaboration and eventual adoption of the Montego Bay Convention. We are also proud of our historical leadership, along with others, in strengthening the rule of the law of the sea,” she said.

Johnson Smith further noted that an intrinsic contribution to the relevance of the Convention is the Tribunal for the Law of the Sea, which, through its legal framework, has clarified member States' collective responsibilities as to the stewardship of the International Seabed Area.

“This legal framework has also facilitated the successful negotiation of countless maritime disputes. The Convention also continues to guide our collective efforts to regulate the conservation and sustainable use of marine biological diversity in areas beyond national jurisdiction,” she said.

Additionally, she noted that the Convention is one of the few international legal instruments that have codified and institutionalised safeguarding the special interests and needs of developing countries, including Small Island Developing States (SIDS), in the regulation of global commons.

In the meantime, Johnson Smith praised the important work of the authority and the secretariat over the years, in boosting public awareness, filling the gaps in existing scientific knowledge and supporting developing States through capacity development and technology transfer.

“This will further enable our full and effective participation in marine scientific research and our informed deep-sea decision-making,” she said.

Headquartered at the Jamaica Conference Centre, ISA is an autonomous international organisation established under the 1982 UN Convention on the Law of the Sea and the 1994 Agreement relating to the Implementation of Part XI of the Convention.

The authority is the body through which State parties to the Convention organise and control all mineral-resources-related activities in the Area for the benefit of mankind.

In so doing, ISA has the mandate to ensure the effective protection of the marine environment from harmful effects that may arise from deep-seabed-related activities.